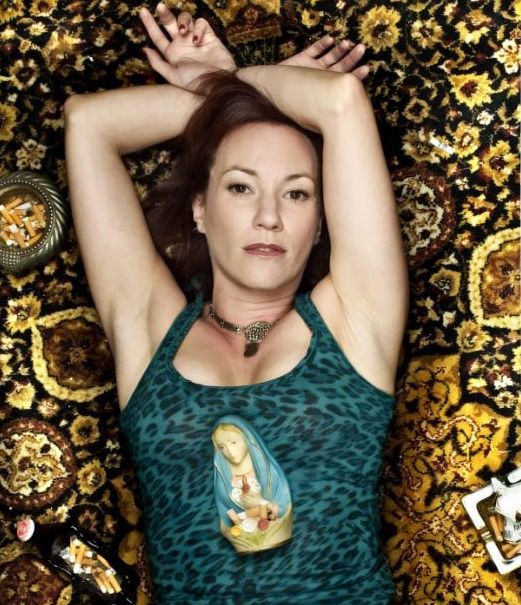 She recently added jilted wife, to her rebellious-résumé— playing Richard Burton’s other half, in the made-for-television film Liz & Dick—but that doesn’t mean she has left us for Tinseltown. Tanya Franks is well-known for her string of noticeable roles: the troubled drug-addict Rainie in Eastenders, Detective Inspector Rowanne Morell in the Bill, Karen Ellis from Family Affairs and the promiscuous, drunk school teacher Karen in the BAFTA nominated comedy series Pulling. As a matter of fact, she has been on-screen even before she was able to utter her very first words. “I started when I was about six months old,” she says with composure.

This shouldn’t come as a surprise because at present, Tanya can be seen starring in ITV’s hit drama series, Broadchurch — where she plays a bankrupt mother, but in her latest role in new Sky Living rom-com Kitten Chic—the feel-good story about a 17-year-old who will do anything to bag the man of her dreams — her presence reminds us just how increasingly inseparable we are from the sort of characters she executes.  As comedy enthusiasts prepare to fall in love with Tanya all over again, the actress dishes on her middle-aged “cougar” antics in Kitten Chic, her on-screen sex scenes (one of which she shared with Phil Mitchell), working with Lindsay Lohan, and how she managed to breakaway from her  obsession with Andy Garcia.

How old were you when you started acting?

And now you’re part of ‘Broadchurch,’ one of the most-watched dramas on ITV. Congratulations.

So it seems. Thank you very much.

The series is coming to an end, and it seems anyone could be a suspect — even you? Feel like dishing out any spoilers?

I am sworn to secrecy, so if I say anything to you, then I would have to kill you. [Laughs]…I don’t think that would be fair. What made you take up acting in the first place?

I’m still not sure what the real trigger was, but it was just something that I always wanted to do. My father was in the film industry – I guess that might have had something to do with it, although I wasn’t around him all the time. It wasn’t as if I grew up in a film theatre or anything like that, but I think he probably did have some kind of influence. I always knew that I wanted to be an actress, so I’m certainly happy how things have turned out.

You’re well known for playing Rainie Cross, the troubled sister of Tanya Branning in Eastenders. Was it fun to play the bad girl?

It’s always fun to play the bad girl. On saying that, with Rainie, it’s not so much that I ever saw that role as it being fun as much as it being a real exploration of somebody going through the kind of turmoil which she went through, particularly on the drug addiction side. I wanted to take that responsibility on board to try and be as truthful as I could without it being sensationalized.

One of Rainie’s key moments in Albert Square was sharing a wild sex scene with Phil Mitchell. Is that still an awkward conversation for you?

What I think is so funny about that is that we actually did nothing on-screen whatsoever [collapses into fit of giggles]. I think it’s hilarious that people latched onto that one because we didn’t do anything at all, but for some reason, it’s provided all kinds of pictures in people’s imaginations. I’m still not sure if they are scenes of horror or satisfaction.

Rainie has a new on-screen sister. Are you making any calls, trying to get back to join the gathering?

No, not at the moment. They did ask me to come back last year, but I wasn’t available. I don’t know if I am going back anytime soon or in the near future.

Do you feel as if people expect you to be a headcase, since they associate you with Rainie?

It’s really funny because that character came along after I played another character called Karen in Pulling, who was a drugged up primary school teacher. I think many people thought that Rainie came off the back of that character, but weirdly it didn’t. They happened to coincide, and it was really quite odd because Pulling hadn’t gone out at that point and for some strange reason, the role for Rainie came along.  I didn’t play any roles that were particularly that wayward before, so I was offered two really wayward characters in a very short space of time. I really do play a mix of characters, and they do keep me very challenged as an actress.

What can you tell us about your latest role as Denise in the new comedy ‘Kitten Chic’?

I think she could possibly be classed as a headcase. She’s a mom with a teenage daughter. She goes out with a 19-year-old boy, and she is also an eBay addict. I don’t think we can call her the sanest of all people.

Are you similar to your character, Denise?

I’m not going out with any 19-year old at the moment [laughs]. I’m not really into eBay either –on that note I don’t think we have anything in common.

‘Kitten Chic’ is about love. Can you remember a time when you fell in love?

Yeah, I have certainly fallen in and out of love a few times in my life.

Do you remember your first screen kiss?

Oh wow, I have definitely done a lot of kissing on-screen – that’s fair to sayI’m pretty sure I remember who the actor was, but ‘can I remember the specific kiss?’ I don’t think I can. It’s all part of the job for me, but before I started doing screen kisses, I had already kissed a bunch of actors on theatre stages around the country.

To quote the great lyricist LL Cool J, it seems like Kitten (Poppy Rush) and Jake (Lucien Laviscount) both “need true love.” How do you think their relationship will conclude?

Lucien Laviscount plays one of the lead characters. Tell us about him please.

Unfortunately, I actually didn’t get to work very much with him as most of his scenes were with Poppy. I mean I’ve met him, and he is a really nice guy.  Sadly, I wasn’t in his company very much, but it was a really nice cast in general. Do you see yourself doing strictly soaps and drama, or will you be leaving us for Hollywood?

I have already dabbled my toes under the Hollywood sign. I did a film over there last year called Liz and Dick, which is about Liz Taylor and Richard Burton with Lindsay Lohan playing Elizabeth Taylor.

You mentioned starring alongside Lindsay Lohan. Is she as outrageous as she seems?

In my company, I wouldn’t’ say she was but I’m guessing the news must come from somewhere. I don’t know.  It certainly wasn’t in my vision. I got on fine with her. We had a good chuckle on set, and everything was great.

Were you a fan of Lindsay Lohan before working with her?

To be honest, I knew very little about her. I’m quite terrible as I do not tend to read newspapers. I actually really didn’t know much about her life, but I knew she was really good in Mean Girls. Apart from that I didn’t really read anything about her. What I later knew was what I heard once I found out I was going to be working with her, but I always take those things with a pinch of salt. I didn’t go in with any pre-judgements or anything like that. Lindsay was fine. She was okay with me.

Have you ever played a role that was outside your comfort zone?

I guess there was one sex scene I did in Pulling [laughs]. I was being shagged from behind by a bloke in a bed which was good as not much could be seen, but there was that thing where I sort of said: ‘Oh no, my mum is going to see this.’ Fortunately, she really likes the programme so that was all good. I think, all in all, that was probably the one moment which was questionable, but it was all for the sake of art. I’m happy that I’ve broken down that barrier.

So, would you now like to do more of those scenes?

[laughs out loud] It’s not that I would necessarily really like to or not like to – I think it depends on what the job is. However, as I’m getting older I think I might get asked to do less.

Do you have any Hollywood crushes?

I have my eye caught daily by the man in my life. Then again, years ago I did use to have a crush on Andy Garcia, but I think I’m well and truly over that one now.

Have you read anything terrible about yourself online?


I’m not sure if it’s still there, but I remember seeing my head, which was inflated on to a pornographic website [collapses into fit of giggles]. The funny thing is that Lindsay Coulson’s name was also on this page. It wasn’t really horribly graphic, but I did remember saying “I can’t recall being in that position.”

Tanya stars in Broadchurch tonight on ITV1 at 9pm. She will also appear in Kitten Chic, Thursday 11 April on Sky Living at 9:30pm.