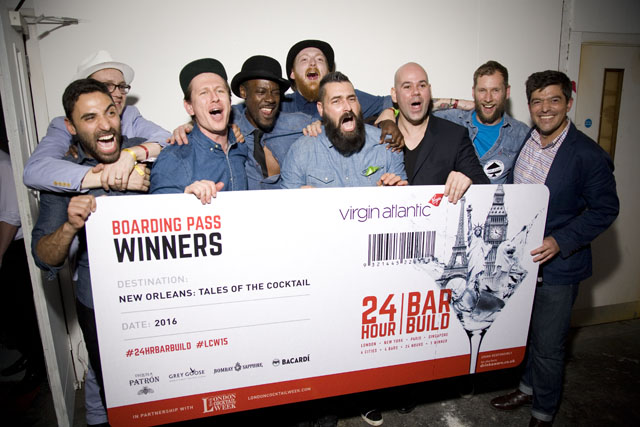 Four cities battled it out in a #24hrBarBuild from concept to cocktails during London Cocktail Week. Team London captain Richard Woods from Duck & Waffle: ‘The best city won’ Team London triumphed over Paris, New York and Singapore on Saturday to be crowned World’s Best in the 24 hr Bar Build Challenge created by Bacardi Brown-Forman Brands and Patrón Tequila

Taking place at N&C Showrooms in Shoreditch, more than 700 cocktail lovers witnessed 24 of the globe’s best bartenders undertake a colossal challenge – build and design a bar in less than 24 hours. All were judged on their bar aesthetic, drink quality and invention and how well they captured the spirit of the individual cities. The winner was voted for by the public and industry experts, including Difford’s Guide’s Simon Difford. But it was Team London who emerged victorious, led by Duck and Waffle’s head of cocktail development, Richard Woods. They wowed the crowed with amazing Patrón-based cocktails, while distressed walls and cacti littered around the bar helped create an authentic Mexican feel.

On winning, Rich said: “It’s amazing and a relief. Ultimately we’re the best cocktail city in the world – we were given a brief and we delivered. The best bar won.”

“The biggest challenge was the timing. It was a huge ask putting something like this together in this time period. We wanted to create a space that captured the sustainable ethos of Patrón and would capture consumer’s imaginations. “It’s about giving tequila a second chance that emphasized the idea of second chances by demolishing the preconceptions of what tequila is. We wanted people to put their hand prints on the wall as it takes 60 hands to make Patrón but loads more for a great night.”

Patron’s winning team London will receive flights to next year’s Tales of the Cocktail in New Orleans, the world’s biggest cocktail festival.

Paris, representing Bombay Sapphire, came a close second with its Grand Bleu bar – featuring a disco ball suspended above a bath tab full of ice cubes. New York City and Singapore made up the last two spots, with the former going for a hip-hop style club and the latter opting to turn their bar into a Cuban boxing ring.

Matthew Sykes, Marketing Director for Patrón Tequila, comments: ‘We couldn’t be prouder of team London, they are a super group band of bartenders and have worked incredibly hard to devise a concept consumers love and deliver it in record timing. I have not seen a trade competition like this before that has focused on what really matters, delivering a great bar experience as well as great drinks to consumers. The reaction from guests tonight was amazing. London is a city that really loves its cocktails and has world class bartenders to match, as seen tonight.”

Simon Difford, of cocktail publication, Difford’s Guide, said: “We chose these cities because they’re the cocktail capitals of the moment and the style of drinks is different for each one.”

“It’s a brave thing to do as it could have gone horribly wrong but it’s been fabulous. What it really drove home was the teamwork from all the bars – it’s like a football team full of talent that don’t play together, coming together and pulling off an amazing performance.”

From designing a unique bar concept through to actually building the bar and creating a cutting-edge cocktail menu, each city team was judged across a wide range of skills. An expert judging panel, along with the general public who attended the event, determined who would be awarded the title of overall winner, an honour bestowed on team London, representing Patrón Tequila.

An expert team of judges awarded marks for creative concept, quality of cocktail list and social media buzz, but it was consumers that had the final say as each team competed to attract the most sales when the bars opened at 6.30pm on Saturday 10 October.

The first stage of judging was a shark tank to pitch four different concepts and agree the winning idea to take through to development.  The winning concept that was presented by Team London on 10th October at the 24hr Bar Build was called ‘Second Chances’.

When talking about the concept, Richard explains; “Truth be told, tequila can have a bad reputation. People’s nervousness around tequila is often caused by the less premium tequila they were drinking back in their student days but Patrón is an ultra premium white spirit, made with 100% Weber Blue Agave, it is a world away from those nasty memories.”

“Tequila is often a misunderstood spirit and we wanted to embrace that, giving people a second chance to have a first impression of what tequila can be, what tequila is and what Patrón is all about, I think we’ve done that tonight.”

The ambition of a zero waste bar is something that Team London really believes in.

“Patrón leads the industry in reducing the environmental impact of tequila production, they have a reverse osmosis system which allows them to reclaim water used in the production of tequila, which they then use in their cooling towers and to irrigate the fields. They also use the leftover agave fibre to create organic compost. And so we wanted to reflect all of that.”