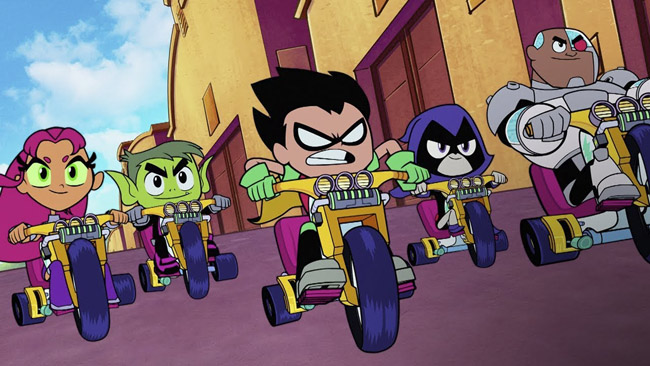 With the school holidays forced upon stressed-out parents, there truly is no better movie to bond over with your little darlings. Teen Titans Go! To The Movies – a feature-length movie spawned from the animated Cartoon Network series – is naturally silliness personified which instantly connects with both adults and the kids it’s aimed at. An active part of the cinematic DC universe, this is one route that finally works its fun magic.

Whilst the rest of the DC superhero community are typically treated like the megastars they are, with movies dedicated to each; Robin and his merry team of Titans are looked upon as jokes in their universe and treated very much with hearty contempt by the very idols they look up to. The story follows Robin, who like a spoiled brat, demands that himself and the rest of the team get their own movie. However, they promptly start realising that if their dream of having their own movie is to come to fruition, they need an arch enemy. Enter the Deadpool copycat villain Slade (voiced by Will Arnett).

The best thing about this animation is its ability to mock its own live-action DC universe; many of these tongue in cheek references may just fly over your kid’s heads but it keeps the adults very much invested. It not only pokes its judgemental figure at the embarrassment of its Green Lantern movie but also takes a cutting stab at the infamous Martha sequence from Batman V Superman.

Throw in a few sly digs about Shia Lebeouf and a confusing cameo from Stan Lee who, even though he is a Marvel man, he doesn’t miss any opportunity for a cameo spot. Watch out for the subtle, blink and you’ll miss it eggs too, especially a poster that pops up in the background of Superman with a moustache, And Yes, this is a DC movie but it also pays a weird and wonderful homage to Back to The Future

Breaking up the laugh a minute dialogue which includes a balloon villain farting its way into extinction, the Teen Titans take any opportunity they can to throw in a catchy feel-good tune or two led with the simply titled Upbeat Inspirational Song About Life and bust a few moves to go with the colour popping atheistic. Apart from being full of crude jokes and snide digs, their ultimately lies a message amongst the hilarity. One that includes the importance of teamwork and the vulgarity of one’s own self-importance, that the world owes them something without actually earning it that is plaguing our world.

If there is one superhero film you take the kids to this summer, Teen Titans Go! To The Movies should be your number one choice purely for the amount of fun that will appeal to both sets of audience goers but for the pure audacity, Warner Bros Animation has taken to poke fun at its own studio’s failings in trying to get the live-action movies in becoming a success.

Teen Titans Go! To The Movies is released August 3