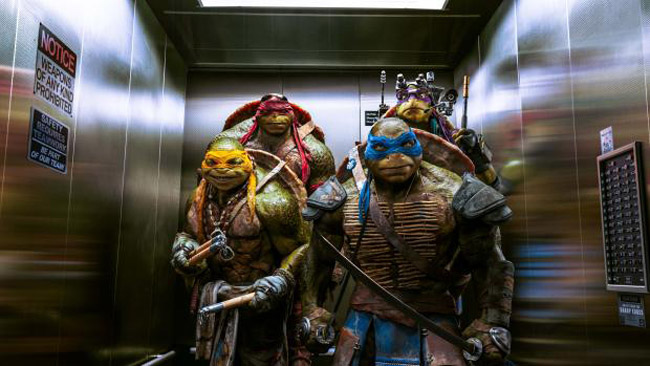 One thing is for certain when it comes to Teenage Mutant Ninja Turtles Out of the Shadows; it’s not about making a movie full of entertainment and gusto than making a movie as it’s a sure fire way of making a large amount of cash from the disillusioned kids of today.

Teenage Mutant Ninja Turtles Out of the Shadows is produced by the big budget of Michael Bay in a 3D format which has no impact, and blistering relentless action sequences. Our shelled heroes are nothing but glorified knuckleheads whose names have been dumbed down for an uneducated audience i.e. Donatello becomes Donny and Michelangelo becomes Mikey or maybe this is just in keeping with the complete lack of intelligence the turtles in a half shell really have.

Our four graphically enhanced ‘heroes’ are forced to come out of the shadows when the incarcerated Shedder makes a daring escape along with another couple of dunderheads, Bee Bop (Gary Anthony Williams) and Rocksteady, WWE Superstar Stephen ‘Sheamus’ Farrelly – whose accent seems to jump from Irish to American to Irish again –  and teams up with up with mad scientist Baxter Stockman played by an extremely over the top and hammy Tyler Perry in order to take over the world with a body altering serum aided by an Alien being. Aliens are not to be trusted and as Shredder is double crossed it is up to our pizza loving muscle head Turtles to save the world from complete destruction with the help of a pouting ‘I’m only in this movie to bring an air of sexiness’ April O’Neil played by a one dimensional and talentless Mega Fox, Disgruntled Cop Casey Jones (Stephen Amell) and Falcon aka Vemon Fenwick the undoubtedly humourless Will Arnett.

Unfortunately, for the Turtles on this outing, we are faced with nothing but a dull and humourless story. Oh, it may have near perfect visuals and constant action and big bangs but it simply has no life. The turtles are just as mundane as their human friends who try their hardest to bring humour to the script but fail miserable.  Megan Fox is simply eye-candy as she goes from one sexy disguise to another, with a pointless look upon her face. Arnett can only go so far with the comedy but if it simply isn’t in the script he has no hope.

Teenage Mutant Ninja Turtles Out of the Shadows is out in cinemas NOW.