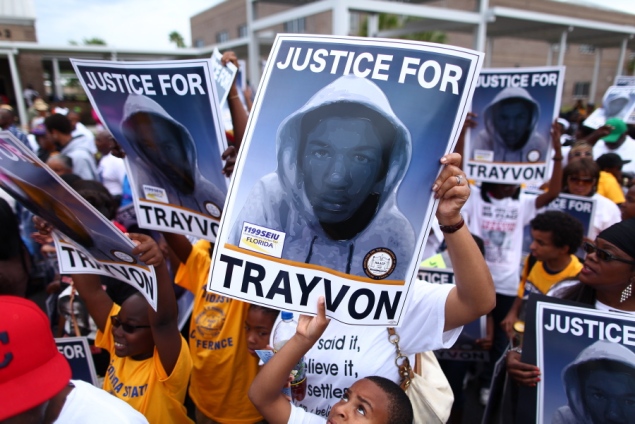 Crowds of people swarmed the streets of Los Angeles yesterday to protest against George Zimmerman’s ‘not guilty’ verdict for the alleged second-degree murder and manslaughter of 17-year-old Trayvon Martin.

Shortly after crowds began to gather, the ‘quiet’ protest soon became disorderly leading to the arrest of 14 people.

The Verdict
The Martin family is said to be ‘disappointed’ and the verdict has angered many American citizens, including supporters of the Martin family who have followed them on their journey in seeking justice for Trayvon.

Many took to the ‘Justice for Trayvon Martin’ Facebook page which was set up in memory of the teenager, to vent their frustrations at the verdict.

Destinee Green, a supporter of the Martin family took to the page saying: ‘See this the problem. Now since Zimmerman has walked free, people are going to think they can shoot and kill a “suspicious” person and get away with it. And this man can’t even claim self-defense’.

The teenager’s parents have fought vigorously to uncover the truth over the past year, with his mother still insisting that ‘I just need some answers about what happened that night’.

What happened
Unarmed Trayvon Martin was shot by local resident and coordinator of the local neighbourhood watch team, 28-year-old George Zimmerman during a confrontation which instantly turned physical.

Shortly before Martin’s death, local residents of the gated community in Florida where Martin was visiting had suffered a chain of break-ins prompting a neighbourhood watch team to be formed.

Martin’s fatal death has united many American citizens with well known celebrities such as Rihanna, Jamie Foxx and Bruce Springsteen all showing their support.

It is also reported that musician Stevie Wonder, who is also disappointed with the verdict, has vowed never to perform in the state of Florida again.

In a video filmed during a full live concert in Quebec, Canada, 63-year-old Stevie Wonder announced: ‘Until the “stand your ground” law is abolished in Florida, I will never perform there again’.

The Martin family is said to be considering launching a civil rights case against Zimmerman for which a petition has been lodged but are yet to publicly confirm this.