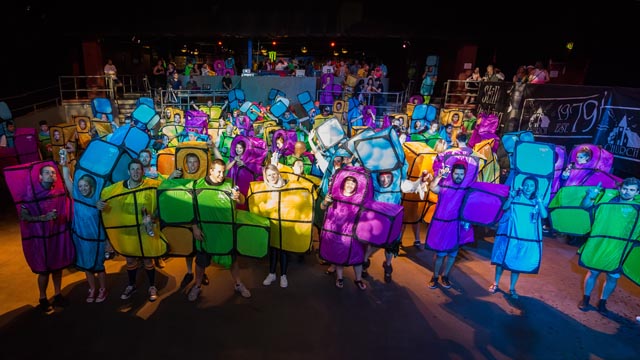 To mark the 30th anniversary of the iconic Tetris video game, 293 fans gathered in London earlier this week to set a new world record for the most human Tetris pieces joined together.

It has been just over 30 years since one of the most famous video games of all time – Tetris – was unleashed into the world, bringing with it millions of hours of entertainment for gamers worldwide. To celebrate, the guys over at Morph Costumes teamed up with the makers of the block building phenomena and brought together 293 human Tetris pieces to set a new world record for the largest human Tetris gathering in history.

In under an hour, 293 excited participants donned the human Tetris costumes and joined together to create the supersized line of Tetrimino pieces.

Jamie Black, Tetris enthusiast and world record participant, commented:
“I started playing Tetris when I was about 10 on my Game Boy, and to say I was addicted was an understatement! I’ve tried to make Tetris costumes in the past for multiple fancy dress parties, with varying rates of success – so getting involved with this once in a lifetime Tetris world record attempt was a dream come true! It was an awesome experience and I’m ecstatic to be part of Tetris history.”

It was 1984 when the first ever iteration of Tetris began the game’s meteoric rise to global superstardom, and Morph Costumes teamed up with The Church Party Bar in London to bring the game to life.

Sara McCraight, Brand Manager at Morph Costumes commented:
“Tetris is one of the most loved games of all time and we knew we needed to think inside the box when it came to designing a celebration worthy of the gargantuan love for Tetris. The game has been played and loved for over three decades and is now present on virtually every console, handset or gaming device available, so nothing short of a world record attempt would do.”

“This is only the start though. We may go for a record attempt spanning continents to celebrate the Tetris brand’s 50th anniversary…watch this space!”