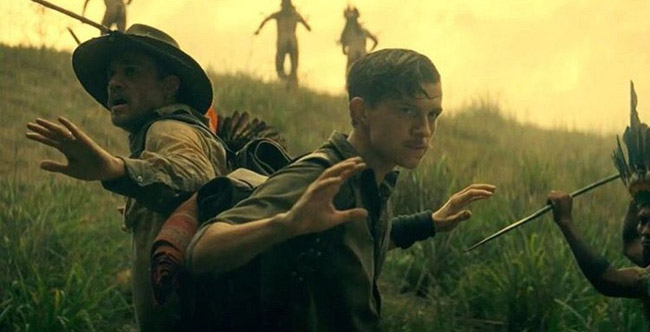 Cerebral and oddly intoxicating James Gray’s adventure into one man’s life-long obsession for the Lost City of the Amazon he called Z, takes us on an almost trippy journey of British Explorer Percy Fawcett’s, at times, ridiculed and fateful mission to unearth his dream.

The Lost City of Z is an adaptation of the novel from David Gann, but this story, surprisingly, doesn’t jump directly from the pages of a fantastical world but is based on the true story of a determined and single-minded man, one who wouldn’t think twice about leaving his wife and young children at home for unthinkable lengths of time just to follow his dream of discovering a world no one was even sure existed.

Fawcett, played by Charlie Hunnam, once a Major in the British army with an unfortunate line of ancestors whose name was detrimental to Fawcett’s advancement finds himself hired by the Royal Geographical Society to act as what could be translated as a peacekeeper over territorial boundaries in the Southern States of America. Once deep in the heart of the Amazonian Jungle, Fawcett finds himself surrounded by British pomp and privilege witnessing a strange set-up operatic stage for entertainment, but when he discovers broken pottery and sculpture that human existence had roamed the land before his passion is awoken for the mystical journey which includes being shot at with arrows from natives concealed by the jungle. After his first two-year stint of adversities and hurdles, Fawcett again finds himself back home surrounded by the bigotry of white privileged men who want him to keep quiet regarding his findings. However, Fawcett adamant to prove himself refuses to be influenced by these men and gives a rousing speech and vows to return time and time again.

Just like any story, it has a beginning, middle and end but all set out with a unique intrigue within three chapters of exploration of the Amazon and a home life with his supportive wife Nina, played adequately by Sienna Miller. Fawcett is almost blinded by his own masculinity and obsession of his discoveries to see that his own children, especially with his eldest son Tom (Tom Holland) have become strained by his constant absence.

On each journey, Fawcett uncovers more information which adds fuel to his fire. Fawcett and his team, consisting of a bearded and rather scruffy Robert Pattinson who incoherently mumbles, not sure in what accent he is trying to portray, encounter cannibalism and treachery aided by greed within the ranks which, along with the calls of war end his second journey. With almost losing his sight in the war, it’s many years before his final third fateful return in which he takes his son in order to heal the rift between the pair.

A fascinating drama with a unique pacing set over a 2 hour 20 minutes running time, The Lost City of Z can feel like a long hard slog as its embers burn at a snail’s pace, but its quirky even tone has an intriguing haze of fact versus fiction blurring the lines of an evidently embellished tale.

The Lost City of Z is in cinemas March 24.