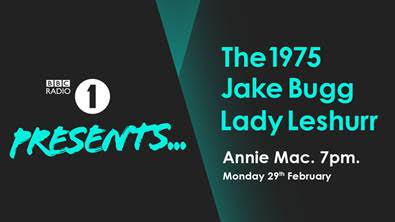 Annie Mac has always been the tastemakers’ tastermaker launching and co-signing some of the best music around.

Importantly Annie is a supporter of UK music and right now UK music is some of the most innovative at the moment and we love it! As a show of all that’s great about the UK, Annie Mac present a night where three UK acts pushing the boundaries and spear heading their individual scenes come together; The 1975, Jake Bugg and Lady Leshurr.

The 1975 are the brash alternative rock band who thundered onto the scene with their debut album the eponymous The 1975 (2013) . For fans they get a chance to hear some fresh tracks from their album with a rather long name; I Like It When You Sleep, for You Are So Beautiful Yet So Unaware of It (2016).

Jake Bugg is the young guy who seems from a different era with a sound which conjures up images of acts like the legendary The Who and Jake Bugg’s great influence Jimi Hendrix. He will be playing some fresh tracks from his forth coming third album as well check out one of the singles from that album On My One.

Last up will be one of the hottest emcees (male or female) right now from the UK, Lady Leshurr. Lady has pushed her stock even higher with her series Queen’s Speech where she tears up the mic with humour and lashings of talent. Lady Leshurr is in fact really making some serious waves across State Side with names like Akon, Chris Brown and Busta Rhymes now aware of our very own lyrial destroyer.

The event takes place at the iconic Kentish Town venue on the 29 02 16.

For tickets (which are going very quickly) scroll down.