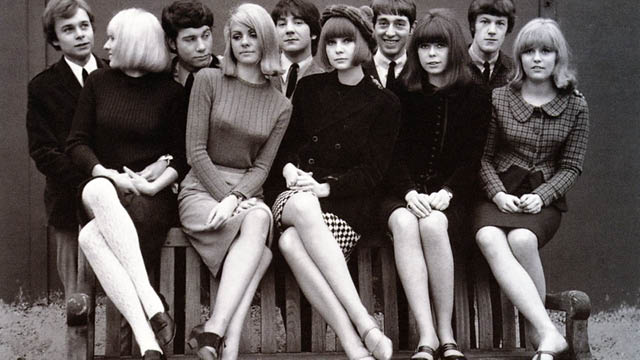 This season, it’s all about the swinging sixties. Here, Daniel Footwear talks us through this season’s must-have retro-inspired styles:

Before the 1960s, boots were mainly used for riding and outdoor pursuits. However, throughout the decade, hemlines started to rise. As a result, women chose boots to showcase their legs — the go-go boot was born.

Named after the ‘gogue’, the French word for joy, the boots have a characteristic block heel and plastic construction. In 2016, the signature shape has remained but the boots are now crafted from more sophisticated materials like suede. In the 60s, female fashion was youthful, aiming to create a doll-like appearance. A-line skirts helped with this ideal, as they skimmed the hips and were usually brightly coloured.

2016 has seen a revival of this style. This season, choose an A-line suede skirt is a rich tan or burgundy and pair with over-the-knee boots. Fitting in to the doll-like aesthetic, shift dresses with collars were worn to make women appear more youthful. Often thigh-skimming, the dresses were reserved for more casual occasions and never worn to the office.

Nowadays, the collared shift dress is a staple part of every woman’s working wardrobe, offering a more formal style.

Despite emerging in the 1800s, Chelsea boots were big in the 1960s. Originally a unisex shoe for horse riders, the boots were renamed the Beatle boot over the course of the decade, after the iconic band was spotted wearing them. Narrower, more pointed and with a Cuban heel, the 60s version of the boots have garnered their own iconic status.

Men and women are still wearing this popular style for both formal and casual occasions. Monochrome styles are big this season, especially when paired with ankle grazer jeans.

A popular work-wear style in the 60s, co-ords were popular with some of the decade’s icons, including Mia Farrow and Raquel Welch. They tended to consist of a form-fitting skirt that ended just about the knee and a tailored jacket. Controversially, pant suits also emerged for women, although some workplaces banned them.

Autumn winter 2016 is big on co-ords. Crop tops and pencil skirts are arguably the most popular style, and will effortlessly see you through the party season.

Along with the go-go boot, pointed shoes were a popular 60s style. Pointed flat shoes were worn by women to elongate their legs even further as they wore miniskirts. However, the shoes were often longer than they needed to be, making them difficult to walk in.

Pointed flats and heels are popular this season, although they definitely fit better now!