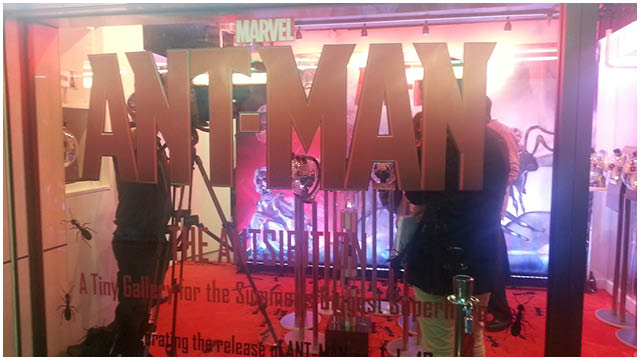 From July 13th 2015 experience Marvel’s latest superhero, Ant-Man on a small scale at THE ANTSIBITION in partnership with IMAX 3D. THE ANTSIBITION will give fans a glimpse of the amazing scale of Ant-Man with a remarkable gallery of tiny proportions ahead of the film’s release on the biggest format possible, IMAX 3D.

The “Ant” sized gallery will be open from 13th to 17th July 2015 at Old Street Station in London, and will give visitors a unique chance to experience the tiny world of Ant-Man up close as miniature magic is brought to the gallery which measures just 4.5m by 3.2m.

Artwork on display will include minute Ant-Man film art and micro-sculptures by renowned British micro-artist Willard Wigan MBE, who will also reveal a new, bespoke piece inspired by ANT-MAN. Wigan’s work is commonly placed in the eye of a needle, or on the head of a pin. Once completed, his work measures only a few micro millimetres (less than 1/13th of the size of a grain of rice). We had five minutes for a quick chat with Willard about his involvement with the exhibition. How did you get involved with the Antman exhibition?

I was invited to come here, seeing as my career started with Ants. They are the fiercest animals in the rainforest. Started making houses for Ants when I was a young kid and I ran away from school a couple of times, I was branded as being illiterate.  I discovered my art when my dog destroyed an ants nest and all these ants came out the ground and I thought the ants were homeless so I felt sorry for the ants, I started to cry as I thought the ants had nowhere to live. So I started making them houses. I used my Dad’s razor blades, sliced up splinters of wood and started building little houses for ants. My whole journey began from there. When my mother saw it she burst into tears, she said something to me; she says when you make them smaller your name will get bigger, so I got bigger by getting smaller. Little things do mean a lot in this case because I’ve know created the smallest sculptures in history. It’s great to be associated with this, Marvel has always been one of my favourites anything small has always fascinated me.

Did you work with the creators of Antman.

No, I just had a picture of it and memorised it, I can look at something and just photograph it in my head and just do it.

How long does it take to make something so small?

Sometimes it can take a month, sometimes two sometimes 2 and a half weeks, it depends, they vary. I sometimes simultaneously work on two at the same time.

How do you manage to have such a steady hand to create something so small?

Throughout my whole life my hands just got more stable, I train my body. I work between my heart beat now. From a kid I had a steady hand anyway, I learnt how to control my breathing, I learnt to work between the pulse beat. I made finer tools from broken shards of diamond and I would use acupuncture needles and sharpen them, grind them down at the ends so they go thinner than a bee sting. I manipulate the tools myself, so my tools are microscopic, smaller than the works sometimes but you need tiny tools for tiny work. MARVEL PRESENTS THE ANTSIBITION IN PARTNERSHIP WITH IMAX. IT WILL BE OPEN TO THE PUBLIC FROM 14 – 17th JULY, FROM 8AM – 9PM AT OLD STREET TUBE STATION.

THE IMAGES DEPICT AN INCREDIBLY DETAILED ANT-MAN AMAZINGLY CREATED WITHIN THE EYE OF A NEEDLE. FURTHER WORKS BY WILLARD WILL ALSO BE AVAILABLE TO VIEW, AS WELL AS MINUTE MARVEL ART

EXPERIENCE IT IN IMAX 3D