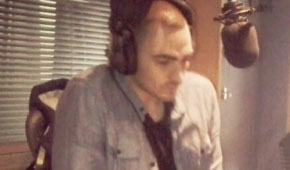 Day Three of the “Artist Diary” continues with rising singer Charlie Brown, who provides us with a fascinating look into his promising musical career. His debut single ‘Dependency’ will be released on December 2nd.  In the meantime, here’s what he’s been up to… Had my first radio interview today to promote Dependency (my new single), with DJ Woody at Choice FM who invited me on his show. It was a great feeling to be finally out there promoting a song that I’m putting out… As a writer working behind the scenes for years, it’s always been an aim of mine to be getting out there as a solo artist.

In a roundabout way, my story started with Choice FM years back. A mate of mine entered me into the ‘Rapology’ talent show without telling me when I was 16, and I performed at the Fairfield Halls in the finals…. Someone in the audience that night worked at a publishing company (19 songs) who ended up offering me my first publishing deal… And I guess the rest is history. It was a nice ‘full-circle moment’ to be going back into Choice to promote my first single all these years later.

After the interview I went back to the studio to finish the song I wrote about in yesterday’s entry. (P.s: I didn’t have time to go to the gym this morning, so I rode a ‘Boris bike’ to my session… Feeling pretty proud of myself for that). Am mad excited about this new song, I think it’s exactly the kind of thing I need for the record and laying the vocals on it today only made me more sure that it’ll be a keeper!! Big up Camille Purcell, Timz & Focus for the co-write swag!!