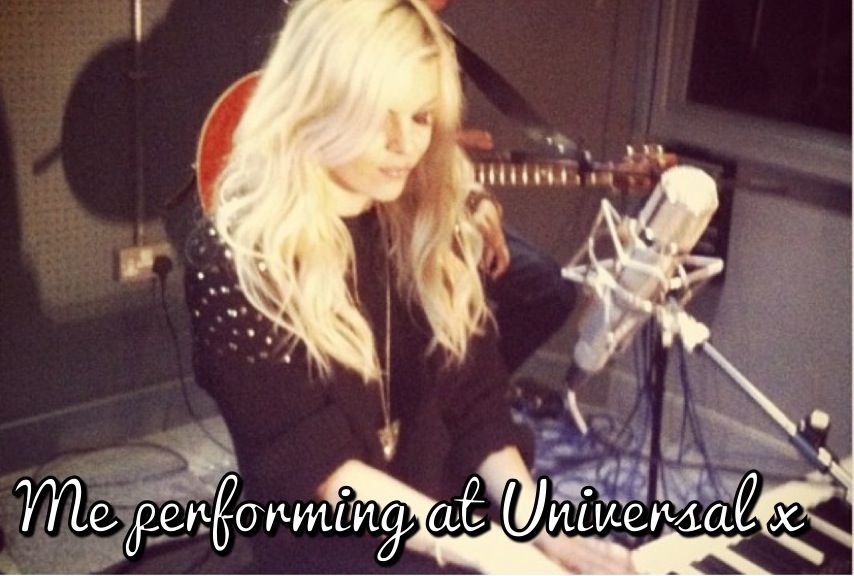 Here is the final diary entry from Singer Jenn D who has spent the last week giving us an insight into her life.  As anticipated, she ends her closing chapter in real style. Today I have been recording an acoustic session at Universal Music studios. I arrived in London at 6pm last night. Headed straight down to rehearsals in Brixton with my guitarist Timz. We ran through the tracks we were going to perform and made sure they were perfect. You know what they say, practice makes perfect. Ha!

I was up at 6:45am to get ready and to be at the studios for 9am. I actually felt pretty nervous, but in an excited kind of way. I love the Universal building. There are lots of pictures of successful artists and it’s really inspiring.

We had a quick run through to get the levels right then it was time to record. Obviously we were under pressure to get it right so it was nerve racking but as soon as we started playing nerves went away and I really enjoyed it. I performed an acoustic version of my debut single ‘Lose It’, which was so different from the actual record. It was fun to interpret it in a different way. We also did a cover of DNA which is the new one from Little Mix. *Starts singing* I’m really obsessed with that song at the moment!

I’m so pleased to share with you all the video for my debut single ‘Lose It’, which is out on November 18. Check it out below and let me know what you think.

Anyways, I’m off  to catch a train now back to Liverpool for a choreography session tonight. It’s for my first live show in London at the end of November! No rest for the wicked…Think I’ll sleep well tonight.

Thanks for visiting my diary – I’ll see you all soon. In the meantime, don’t forget you can follow me on Twitter @JennDMusic