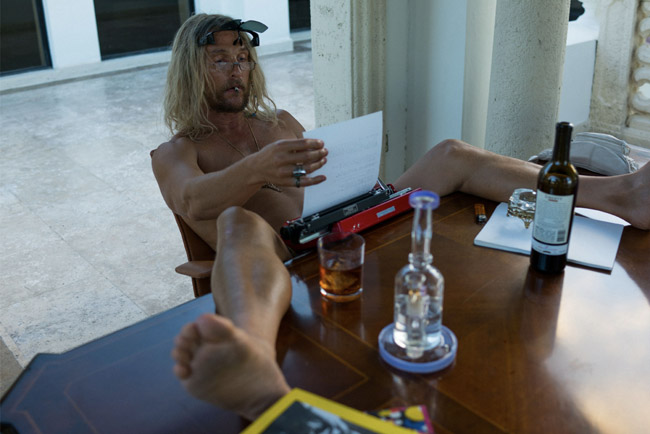 Spring Breakers filmmaker, Harmony Korine returns to the big screen with the chameleon of acting Matthew McConnaughy. Korine yet again pushes buttons in a sleazy hedonistic adventure of responsibility in a haze of sunshine drenched beaches accompanied by sex, drugs and alcohol-fuelled irresponsibility.

Anyone would assume McConnaughy’s Moondog is a down and out bum. Constantly found in a mist of weed, a bottle in hand and a scantily clad female on his lap. The vagrant lifestyle, aided by the aesthetic of his long hair and lack of clothing, proves he hasn’t a care in the world. This once famous poet is, in fact, loaded, living off the fortune of his wife (Isla Fisher). For the first 20 minutes, in a state of confusion, audiences are engulfed in a trippy mess of character and story building as it flits between Moondog’s party lifestyle away from his wife’s watchful gaze and her own promiscuity. From profanity to profound speeches, Moondog’s eccentricity endears him to everyone that crosses his path. Once the wealth is pulled out from under his feet his journey of misadventure takes on a route less interesting and absurd.

Forced to get his act together and get back to writing his long-in-gestation novel he comes into contact with a few interesting characters. Crossing paths with Zac Efron’s pyromaniac party animal to Martin Lawrence’s Dolphin spotting tour guide the picture painted is of a life full of pain but its how we choose to deal with life’s stumbling blocks to finding true happiness. Korine certainly doesn’t make that an easy theme to spot amongst the meaningless muddle of madness.

Being a McConnaughy vehicle, he seems to be right at home in his budgie smugglers, returning to the days of old where he rarely starred in a movie without showing off his impressive pecs. Always taking on characters that have an idiocratic edge makes you wonder just how method he went for this particular role. More than anything else looked like he was having fun.

The Marketing for Korine’s latest has tried to lead you down the comedy path and implying Efron had a bigger role to play than the couple of scenes he actually stars in. This is McConnaughy’s movie but apart for the longing to be soaking up the warmth of its location, it dies a cold death of dullness once the trip is over.