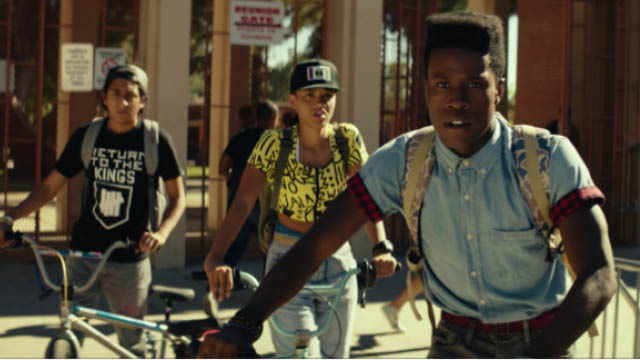 Dope, the brilliant coming-of-age story featuring original music by Pharrell Williams, follows a trio of self-professed high school geeks and bandmates who are obsessed with 90’s era hip-hop and fashion.

In the film, out now Digital HD and on DVD 4th January, they rock some incredible retro looks. To celebrate we’ve come up with our top hip hop fashion fads of the 90s’, we’re definitely guilty of a few of these – check them out below: 1. The iconic Kangol Hat bucket hat, originally debuted by Sugar Hill Gang’s Big Bank Hank in the late 80s’ and worn occasionally by Run DMC, it was LL Cool J who really made this look popular in the 90s’. Not to be confused with the visor, one of the most pointless items of clothing ever invented but somehow popular with those who wanted to give off swagger while keeping their hair intact (Eminem, Vanilla Ice). See also baseball caps – popular with everybody and worn backwards or sideways for extra kudos. 2. Dungarees – very popular with Will Smith during his Fresh Prince days, worn with one strap undone for an air of casual nonchalance. The look worked for women as well as men, TLC wore them all the time (with crop tops underneath), in an array of bright colours.

3. Baggy t-shirts and jeans. You wore your t-shirts or baseball vests in extra-large and your baggy jeans (complete with wallet chains) hung low to show off the waistband of your Calvin Klein boxers underneath. Or if you wanted to be really subversive you wore you jeans backwards like Kriss Kross. 4. The obligatory chunky gold chain – the perfect accompaniment to a baggy baseball vest and seen on virtually every hip-hop star in the 90s’. A great way to show the dollar bills are rolling in, and let’s be honest it goes with everything!

5. Other popular accessories of the time were bandanas – worn by the likes of Tupac and Nate Dogg – and ski goggles, as made famous by Ma$e and Puff Daddy in the brilliant Mo Money Mo Problems – worn on top of the head and to the side obvs!

6. Timberlands. Literally all the coolest New York rappers wore these in the 90s’ unless they were rocking Nike Air Jordan Hi-Tops. 7. Sportswear – the classic Adidas 3-stripe tracksuit, you got extra style points for rolling one trouser leg half-way up! Kappa tracksuit bottoms with poppers up the legs, bomber jackets, puffa jackets and Naf Naf windbreakers were all thrown into the mix. 90s’ cool kids weren’t afraid of colour or pattern either, which leads us onto number 8…

8. Silk shirts, ideally with loud patterns – see Notorious B.I.G and Puff Daddy in the video for ‘Hypnotize’. Versace’s gold chain motif was the height of chic. Plaid shirts were also a key fashion item for pretty much everyone in the 90s’ but also featured heavily on the hip-hop scene – either unbuttoned over t-shirts and paired with baggy jeans, or tied around the waists of the likes of Salt N Peppa, paired with a crop top and denim cut-off shorts.