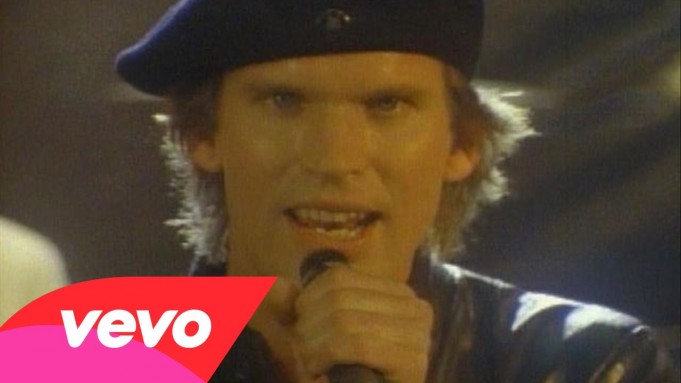 Rocky
The ultimate movie about training to achieve the ultimate goal!  It’s a no- brainer really – if you’re at the gym, you need to be able to picture yourself as Sly Stallone; even if it’s just a celebratory jump at the top of the gym entrance steps!

No workout playlist would be complete without this power-chord behemoth – probably the finest rock pep talk ever committed to tape.  It’s a song so vitalizing it’s virtually impossible to listen to without gritting one’s teeth and nodding along purposefully, before attempting to recreate a Rocky III training montage.

8 Mile
Eminem’s incredible semi-autobiographical rags to riches story oozes inspiration as much as it does cool.  For anyone who’s just starting at the gym, you’re Rabbit – lose your inhibitions and bench press / battle rap your way to fitness.  If Eminem can do it, so can you!

is my fav track on the whole soundtrack, if you’ve seen the film it’s featured in detrimental parts of it, it’s powerful and unlike most rap songs it uses a guitar for some of the main chords in the track, it’s a feel good song and ‘lose yourself’ can be translated into lose yourself in your fitness regime right now.

The Fast And The Furious 2001
Ok, so maybe you can’t hit the treadmill at the same speeds that they drive in The Fast And The Furious, but you can damn well try!  With a pedal to the metal attitude, whack the movie’s soundtrack on your iPod and don’t stop until the last track finishes.  Probably worth making sure you’ve had an MOT beforehand though…

It’s something that I maybe wouldn’t listen to day to day but it’s again another quite aggressive song that gets you going when you’re exercising – an interesting fact too is that this track was originally going to be a hip hop track before Limp Bizkit’s guitarist said they want to turn it into a rock song.

Hangover Part 2
We’ve all been there and we all know that hitting the gym after a session the night before is a toughie.  T’s not half as bad as the things the guys in The Hangover go through so count yourself lucky and quit moaning!  Plenty of high octane tracks on this soundtrack to sweat the booze out and ensure you’re ready for the day ahead.

So many good tracks on this album but my favourite has to be Sofi Needs A Ladder by Deadmau5 – to date this is still one of my favourite Deadmau5 tracks ever, it’s a classic, perfect to get you working!

22 Jump Street
There’s so many great tracks on this one and if everyone else’s experience of university / college was the same as mine then you’ll be able to draw on those experiences to help hold onto the energy of youth, something that seems further and further away as you get older, no more so than when you’re in the gym!  Stick this one on, pretend Channing Tatum is your personal trainer and hit the gym like you’re about to hit the weekend aged 18!

I love the instrumental more than the vocal if I’m honest but this track reminds me of my Ibiza season DJing when the track came out 2011, just reminds me of good times, it’s got a wicked drop that helps you step your exercise up a notch too.

Pitch Perfect
There are plenty of different social groups at the gym but at the end of the day, everyone has one thing in common – getting fit.  Pitch Perfect is all about the singing and the music – throw inhibition to the wind and belt out a few classics to help you push through the wall!

My favourite in this is the medley of Like A Virgin, Hit Me With Your Best Shot, S&M, Let’s Talk About Sex, I’ll Make Love To You, Feels Like The First Time, No Diggity – all oldskool tracks!  It’s also good to know some words to some of the songs when you’re exercising I think – you can get bored with a playlist quickly if you don’t have any tracks to sing along to in your whole work out.

Bridget Jones’ Diary (Just before your warm down)
You might prefer to have a Bridget Jones day rather than hit the gym, but that’s not going to help you long term!  Save the movie itself for when you get home, but take the soundtrack with you to whack on just as you’re over the peak of your workout.  There’s enough inspirational, empowering tracks ont here to keep you moving!

It’s so cheesy thinking about it but this song but “I’m Every Woman”, especially for the girls, is a true power song to get you in the mood.  Great towards the end of your session to give you that extra burst of energy to burn the final calories off!

50 Shades Of Grey (Warm down)
Ok, you’ve had a proper work out and it’s time to warm down.  The gym might seem like a “room of pain” when you arrive, but you’ve conquered it!  We’ve taken the tempo down with this album and it’s perfect while you’re stretching out the last of the workout.

Standout track: The Weeknd – Earned It

Hands down my favourite track on a really good soundtrack, this guy’s voice is incredible!  It’s a good warm down song to chill you out after a good session and it also gets you thinking of the 50 Shades Of Grey movie which is never a bad thing 😉

Written by our guest editor of the month (March 2015) Charlie Hedges follow Charlie on twitter and read her editors letter here:  flavourmag.co.uk/guest-editor-of-the-month-march-2015-charlie-hedges-editors-letter/