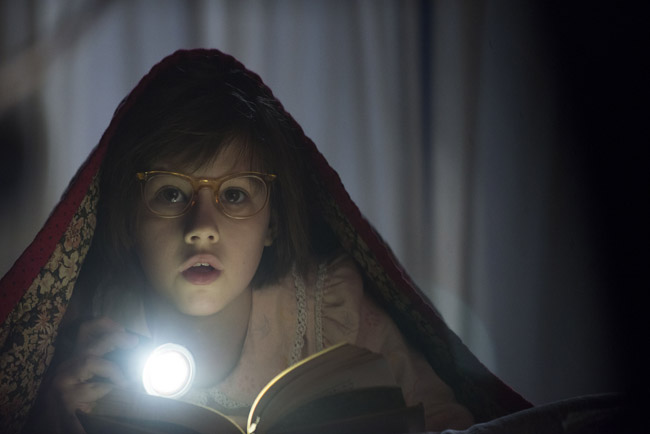 Nostalgia reigns in Stephen Spielberg’s film adaptation of the much loved writings of Roald Dahl. The BFG will connect not only with its younger audience but mostly with the parents who grew up with Dahl’s 1982 offering.

Staying true to The BFG’s origin’s, Spielberg has created a film with magical wonder and tender grace which becomes a visual spectacle for the eyes and a feast for the soul. Then the unimaginable happens, somewhere in the middle it slows down to a snail’s pace with not much happening as Sophie, played the newcomer Ruby Barnhill, and The BFG, played by Mark Rylance, get to know each other.

The opening sequence sees Sophie wondering the halls of her orphanage late at night, suffering from insomnia acting way beyond her years in the footsteps of the incompetent Matron. Scenes of the London streets are made to take us back to the late 1800’s giving that almost fantastical feel. Talking to herself talking about how Giants roam through the night, who are visible to no one, Sophie climbs into bed, a shadow looms and a giant hand sweeps through the open window to swipe her away.

Once in Giant Country where the CG effects come into full effect, the very pushy yet down to earth and adorable Sophie starts to become accustomed to her new surroundings. It takes a while to understand some of The BFG’s gobbledegook speech but she soon learns she isn’t in danger. This comes to light as the humongous Childchewers bully The BFG in his own home and he is concerned about nothing but making sure she is safe. Enter the period of absolutely zero happening, except the visual sequence of wisp-like lights as The BFG takes Sophie dream catching.

Mark Rylance (Bridge of Spies) was an inspired choice to play the role of The Big Friendly Giant, filming his role in motion capture, it’s the tenderness in his eyes and warmth of his smile that bring the CG giant to life, Ruby Barnhill as Sophie also gives a wonderfully enduring performance as she radiates strength with a much needed child vulnerability which makes her character such a likable one.

It’s the final scenes which actually steal the film, where humour reigns and imagination becomes reality as The BFG places a nightmare in the Queen’s (Penelope Wilton) sleep in order to obtain her help in taking down the bullying Childchewers. The funniest scene which will have the kids giggle comes when the queen and her generals sit down to a supersized breakfast with Sophie and The BFG, taking a major dislike to his coffee he offers up everyone a class of fizzy Frobscottle, a giant drink which induces explosive farts. With its childlike innocence and a score by John Williams which transports adding to the magic, The BFG is truly enchanting.