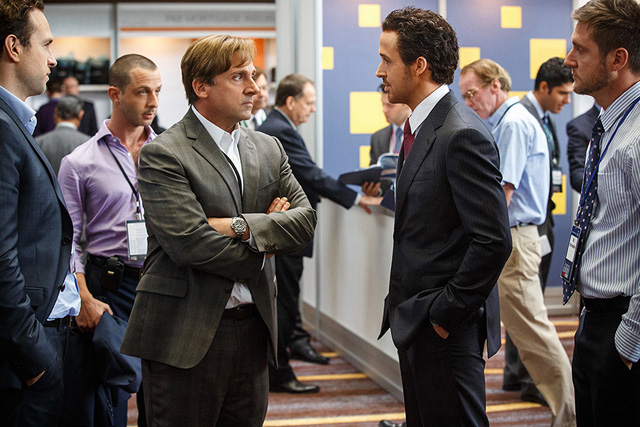 Hollywood has done it again, taken, what at the time, was a devastating period of financial crisis and adapted it for the big screen and tied in a number of A-List actors in order to draw the crowds but does this make it any the more watchable?

The Big Short is based on a true story and is an adaptation of the bestselling book from Michael Lewis, who was responsible for the likes of The Blind Side and Moneyball, of the 2008 financial crash in America which saw millions of people lose their jobs and homes because of the corrupt, fraudulent and incompetent workings of the banks and government who refused to address anything until it was too late. Based around 4 sets of people, the socially inept and unbalanced Hedge Fund MD Michael Burry (Christian Bale), Mark Baum (Steve Carell), a hedge fund manager, full of hate and who is on a crusade against those who control the financial world without a care who the defecate all over, Jared Vennett (Ryan Gosling) a vain banker who is out to make the big bucks and the unkempt Ben Rickert (Brad Pitt) a former banker disillusioned with the banking world who has become at one with the Earth’s natural resources. Each with their own agenda to cash in from what will eventually cause a major meltdown in the US but after digging deeper and deeper and questioning the true extent of the crash have to deal with what it will mean for the everyday Joe. From the very onset, The Big Short is full to the brim of complex financial wording which just jumps right out at you, slaps you around the face making you feel dazed and confused and this lasts throughout making this such an exhausting watch. However, with the narration coming from Gosling, and his moments of talking to the audience we have a few breaks in the heavy dialogue. Aiding the narration, the filmmakers have thrown in a couple of stars in the form of Margot Robbie, in a bath filled with bubbles, sipping on Champagne and then Selena Gomez at a roulette table to explain certain financial terms meanings.

Director Adam McKay, taking a change in direction from his other outings, Step Brothers, and Anchorman, has to be commended for trying to cover as much ground as possible with the stories of these 4 sets of individuals and the effects and emotions these men must have been through at the time. The Cinematography also has that grainy feel, with photographic visuals of random people and places break up the otherwise heavy  going subject matter but compliments its frenzied pace. Not one single cast member can be faulted in their performance, each has nailed the financial terminology to the wall, and if any of the cast struggled with these terms it certainly doesn’t show on screen as they roll off the tongue so effortlessly. Even with Carell taking most of the screen time and proves yet again he isn’t just a one-trick pony with the comedic roles, it’s the eccentric form of Christian Bale which steals the show with his adamant, stubborn and self-confident ways.

The Big Short is released in UK Cinemas 22nd of January