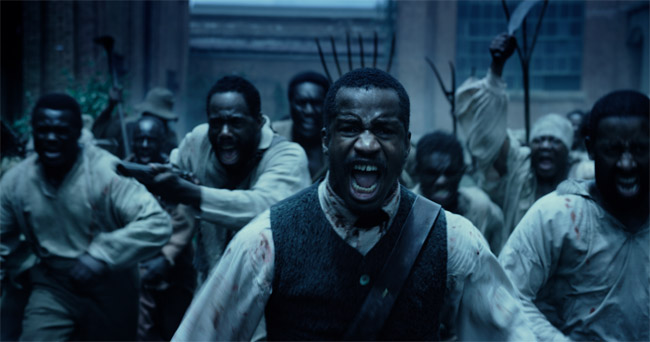 A substantial wave of controversy has surrounded The Birth of a Nation and its filmmaker Nate Parker since it made its appearance at various film festivals over the course of the year detracting away from the actual historical story of the film and its importance.

What is clearly a passion project for first time filmmaker Parker, which not only sees this young actor in the starring role but as director, writer and producer, it’s the first time the true story of Nat Turner’s slave rebellion has been brought to a cinematic screen. The Birth of a Nation gives the distinct impression we are being hit over the head with a visual sledgehammer with its brutal force and ham-fisted performances. The narrative is told with a vain passion which lacks in its ability to treat its audience with intelligence. Parker has tried to jump on the coat tails of 12 Years A Slave and switch it up a notch with its enlightening look at how this one slave acted against the atrocities his people endured at the hands of the white community thirty years prior to the American Civil War but fails to live up to its emotional elegance.

The film opens with Nat as a young boy, not quite quick enough to get to the feeding pot and going hungry, witnessed by his father. Feeling his son’s pain, he is caught stealing food for his family but manages to escape the slave catchers, leaving his family and going on the run. At the same time, Nat’s slave owners notice that Nat can read so take him under their wing to teach him how to read the bible. Fast forward a number of years, Nat (Nate Parker) is now a young man, a literate slave who also acts as a preacher to his people. He is treated as fairly as can be expected in the age’s climate of black oppression and his owner, Samuel Turner (Armie Hammer) has him at his side as he struggles with his finances. When Samuel is offered money to have Nat act as a preacher to the out of control slaves on numerous neighbouring plantations, he snaps it up.

With each visit, Nat witnesses the despicable treatment of slaves at the hands of the vile racist single-minded masters. One scene that sticks in the memory with gruesome ferocity is the explicitly brutal scenes of chained up slaves who refuse to eat so have their teeth physically removed with a hammer and chisel and forced fed. After Samuel drunkenly forces one of his slaves wives (Gabrielle Union) be served to another of his circle for his sexual entertainment and the rape and beating of his own wife Cherry (Aja Naomi King), Nat’s rising anger see’s him explode with empowerment, not just through his passionate sermons but through his actions to act out and take his revenge. Building his army of angry slaves Nat leads the men into a vicious bloodbath of the murder of the white masters which lead to an almighty battle scene which is unconvincing and exhausting with over the top acting which would be better suited to a stage than the screen.

The Birth of a Nation does have a lot of potential but having Parker so invested in this story on a number of different levels has blocked his vision, his passion for such an important story can’t be faulted but it hinders the script and makes the performances stilted in their presentation. A lot more quiet subtlety and less brutal hammering on the head would have been so much more effective.

The Birth of a Nation is in cinemas December 9th.