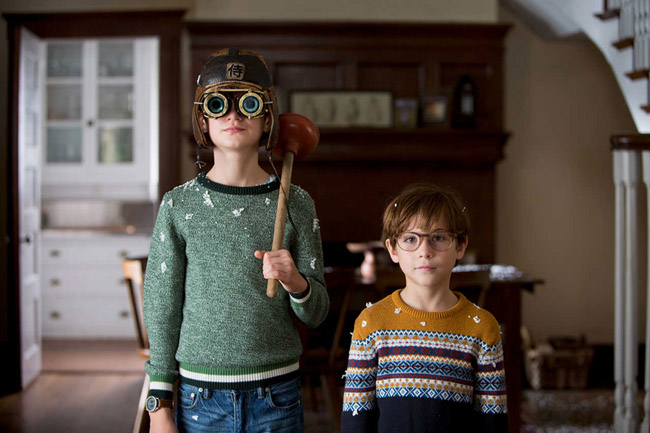 Six months into 2017 and the Razzies look set to have a clear winner for worst movie of 2017 come award season; The Book of Henry more than deserves the title for its trudging baffling plot which spirals into a detached and directional cesspit of incoherent confusion.

You’d be forgiven for thinking this was yet another child genius movie, and in some respects it is, but its narrative yo-yo’s between dark thriller, quirky child genius and odd comedy styles it’s hard to grasp exactly what novelist, Gregg Hurwitz, was thinking when this ill-conceived rambling bore fruit when the man at the helm of the forthcoming Star Wars Episode IX, director Colin Trevorrow, expressed his excitement to bring this awkwardness to life.

The Mother of two young boys Susan (Naomi Watts), a carefree waitress, is single handily raising her son’s. Her eldest Henry (Jaeden Lieberher) acts more the adult than his mother who has an addiction to video games while he takes charge of the family finances and being the “responsible adult” directing his less than coherent mother in the right directions and looking out for his younger brother Peter (Jacob Trembley), who is only part of the cast to prop up the numbers. Equipped with the predictable standard smile-inducing one-liners where the kids upstage the adults they acting alongside the story takes a puzzling turn when Henry is diagnosed with a tragic terminal illness.

Suddenly delving into the dark abyss of child abuse after Henry witnesses his crush and girl next door Christina (Maddie Ziegler) being abused at the hands of her stepfather Glenn (Dean Norris), he makes it his responsibility to step in to get help only to be met with hurdles to high to overcome. Documenting the last possible scenario that might work in his little red book, his last wishes are for his own mother to carry out the killing of Glenn with his meticulously laid out plans which she trusts without ever questioning the plan.

It’s hard to feel anything for a film which has no idea what it wants to be, one minute we’re expected to be emotionally bereft, the next angry and thrilled but all is left is a deep cavern of nothingness induced by such a poorly written script that even the actors, especially Naomi Watts, have a penchant for overacting enough to produce ham for a sandwich. Another unconvincing factor is seen from the fact, even though a waitress, they have accumulated hundreds of thousands of dollars in their bank account from the boy geniuses dabbling in, what can only assume, are the stock markets and bonds.  Paired with an uncomfortable and awkward relationship between Susan’s best friend (Sarah Silverman) and Henry and the anticlimactic ending which regurgitates a saccharine conclusion is nothing but astonishing.

There is no style over substance or substance over style just an idea to merge a number of genres which just doesn’t work due to its less than intelligent script result in a muddle of a picture. Fellow critics and fans alike are, rightly so, extremely scared to witness what Trevorrow will bring to the next Star Wars saga at the end of the year.

The Book of Henry is in cinemas June 23.