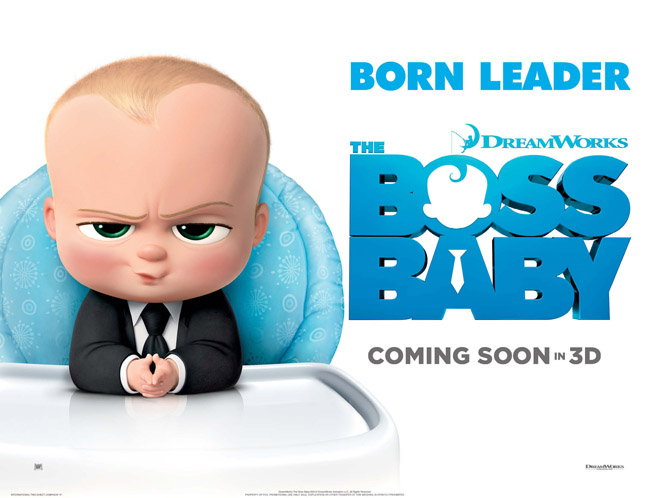 Most parents will probably tell you it’s the baby that’s the boss in their household, but just to make everyone sit up and take notice Trump impersonator, Alex Baldwin has joined his Madagascar cohort Tom McGrath to voice an animation which, considering its faults is better than you’d expect in The Boss Baby.

It’s with no surprise, with babies and puppies ruling the internet that the film world would want to get in on the act, in Tom McGrath’s The Boss Baby, an adaptation of the 2010 children’s picture book by Marla Frazee, we get just that, cute undercover babies from Baby Corp lead by The suited wearing, briefcase carrying, Boss Baby (Baldwin) who is placed in a Family in order to flush out and destroy the number one threat, the Forever puppy.  With any modern day animation, the eye-popping colours and technical visuals burst with excitement, and with Hans Zimmer lending his talents to create the score we’re also taken on a cho cho train ride of nostalgia combining a mixture of new and old to keep the kids entertained and the parents slightly amused.

Narrated by ex-Spiderman Toby Maguire – who voices the grown up version of Tim, the differing story from the book comes in the form of The Boss Baby’s older brother, Tim – until now he has been the only child, spoilt by his parents’ attention; Tim has an overly wild imagination to accompany his petulance. Laced with the metaphor that with a new baby entering the household, jealousy is rife as all the love and attention is taken away from him and focused on the baby causing stomping foot tantrums of hate and rage from Tim and placing an obstacle in the way of The Boss Baby’s true undercover mission. With his eye constantly on the baby, he uncovers his secret and becomes a thorn in The Boss Baby’s side.

Like any rollercoaster ride, the entertainment comes in peaks and troughs with the humour not quite reaching those parts high enough to constantly tickle the funny bone. A run of the mill plot involves formula which stops the babies from growing old, breaking into a puppy conference, a disgruntled baddie adamant in taking over the world and ultimately brotherly love winning the day. All being so familiar it has a certain charm in a first viewing, whether this will stand up on subsequent views is highly debatable.

The Boss Baby is out on wide cinema release April 7th