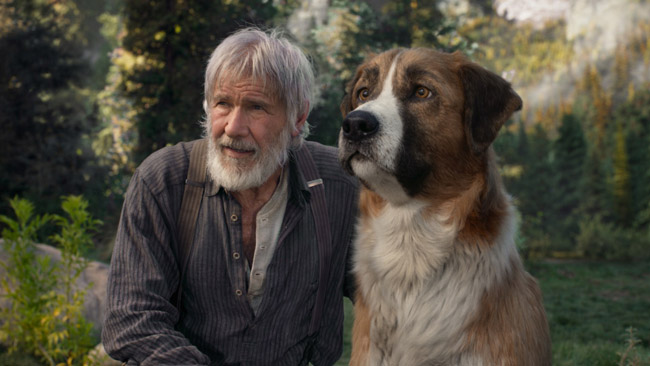 Harrison Ford stars in The Call of the Wild, a shaggy dog tale that will melt your heart with a CGI dog that finds his home in the snowy mountains of Canada.

An adaptation of Jack London’s book of the same name, the fifth in a long line of remakes dating back to 1923, sees Harrison Ford lose his tough exterior to make a CGI sloppy and soppy dog a men’s best friend in this adventure tale that will pull on the heartstrings of the toughest human beings.

Directed by once animator, Chris Sanders, the movie introduces us to Buck, a big, fluffy St Bernard Collie living the Californian life of luxury up to his mischievous tricks whenever there is a whiff of scrummy food in the air. Lovable but prone to wreaking havoc and ruining his owner’s lavish party, Buck is made to sleep out on the porch where he is enticed away by dognappers wanting to make an easy buck. This is where Buck’s journey into the wild to find himself begins.

Buck’s first home away from home has him stationed in the snowy plains of the Canadian mountains, bought to make up a team of sleigh dogs for Perrault (Omar Sy) and his wife (Cara Gee) for their cross-country mail team. Lead by the showy and spiteful Spitz, Buck begins to relish life in the wild gaining the respect of his pack and the people of the town.

By this point you can’t help but wonder, this film is marketed as a Harrison Ford film, so where the hell is he? Ford finally shows up about halfway through, once our hearts have been completely overwhelmed with love for the computer-animated canine. Just in time to rescue a now unemployed Buck and his pack from the Dan Steven’s stereotypical and rather Disneyfied villain Hal. Hal’s quest to find Gold in the Canadian lands sees a malicious and greedy aura overwhelm his violent hand in the dog’s direction until a broken Buck can go no further and is rescued by Ford’s grizzly Thornton.

Ford and the CGI dog are a perfect pairing; Ford’s Thornton is a broken man having left his home and his wife far behind him under the stress and turmoil of losing his son. Now a wandering loner, Buck gives him the companionship and motivation to explore the wild.

It’s the adorable shaggy dog story we’ve all seen before, it gives us nothing new but its decent script keeps you smiling for Bucks big adventure and entertained from start to finish.

The Call of the Wild hits cinemas February 19th