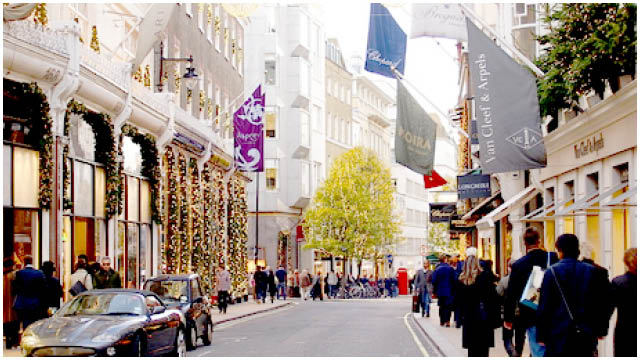 Mayfair is going through something of a transformation. Thanks to its killer place in the Monopoly board game, everyone has heard of this area – and its name conjures up images of a sleepy, expensive and traditional quarter.

But gone are the days when the area was filled the older generations, gentlemen’s clubs and staunch restaurants. A younger, more cosmopolitan population is taking over.

To understand what is happening and why, let’s take a closer look at what changes have taken place. Mayfair-based estate agents Wetherell have recently released a report that gives a lowdown on this region’s demography and property make up, which was made in conjunction with Dataloft, analysts specialising in the property market.

The report gives a complete snapshot of who’s living there. There are 5,118 residents living in 4,348 homes. People from overseas make up 60% of the population, up from 49% in 2001. The proportion aged between 25 and 44 has risen from 33% in the 2001 Census to 42% in 2011. Household sizes have diminished as well, with 55% of rented and 52% of owner-occupied homes having just one person living there. From the 1950s to the 1980s, Wetherell estimates the average age of owners was somewhere between 55 to 75 years of age. Properties were more likely to be inherited rather than purchased. Mayfair used to be where adults with grown up children lived, or grandparents. There have always been families there, but this wasn’t a trend worth noting.

But why are the younger populations moving in now? It’s hard to pinpoint exactly when or why it started. Part of it can be seen like the chicken and egg example. Restaurants, bars and boutiques set up shop in order to satisfy demand from increasingly younger generations with different tastes, which then attracts more of a similar crowd. London has also become increasingly attractive as a hub for the international elite, thanks to its strong economic growth, cultural offerings and world-class restaurants, not to mention the beautiful architecture and close proximity to the rest of Europe. In fact, Peter Wetherell, Chief Executive of Wetherell, says: “Mayfair has become a global-oasis for young people, and a “twin” of destinations like New York, Monaco, San Tropez and Miami, which are the other hubs where the world’s wealthy elite choose to relax and enjoy their leisure time.”

Owing a property in Mayfair remains a challenge, however. With only 110 properties sold per year, it is a highly competitive market and, since 2004, the average price per square foot has risen by 196% – meaning that properties here outperform all other asset classes except for gold. The exclusivity is part of the draw, and knowing that this area outperforms even the other prestigious areas within central London can’t hurt when looking for an investment that’ll last into the future.

Moreover, the average price per square foot for sales is £2,256, recording a massive rise of 72% since 2009. On the lets side, the average weekly rent is £1,283, which is up by 46% since 2009. There are currently 391 units in the pipeline for Mayfair, showing that demand is certainly not abating.