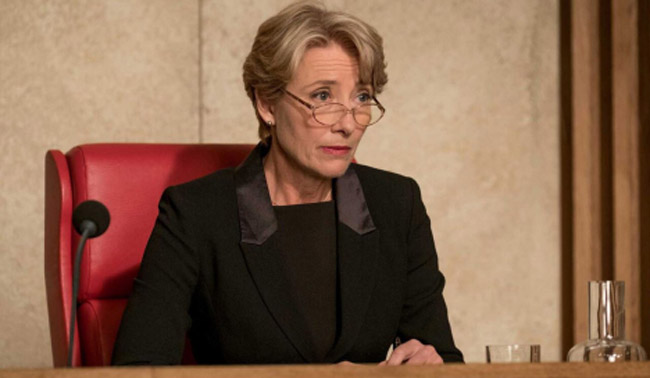 For the second time this year, Ian McEwan has seen his novels adapted for cinema; the first coming in On Chesil Beach and now, in a similar fashion, McEwan’s The Children Act. The latter is an intelligent film which pokes at intimacy, love and furthermore, legal and moral responsibilities; and does so with understated elegance and grace typically depicted from the wealthy characters cinema feeds its audiences.

The story centres on Fiona Maye — played by the ever-reliable Emma Thompson —, a brilliantly intelligent judge who is both feared and respected for her meticulous judgements. Predictably, like most drama’s that centre on a woman of her stature and success they simply can’t have both a happy home and career; whilst Fiona flies high in the courtroom, her matter of fact marriage to Jack (Stanley Tucci) remains childless and hits the rocks. No matter how good the drama it’s becoming just lazy to depict women and their personal relationships with their careers and home life in this manner.

The first half of the film gently establishes Faye’s world shooting down lazy lawyers and making legal decisions for minors with an enormous amount of empathy, but there are two sides at play in Fiona’s life. She spends many evenings bringing her work home and neglecting her husband. Completely unaware of how to switch off from her day job and her husband’s mounting frustrations, in turn exposing her struggle to cope with issues of intimacy.

The second half takes a twist when a complicated case hits her desk. Just shy of 18, a hospital makes a legal bid to save the life of Adam (Fionn Whitehead) by giving him a blood transfusion. The issue is, his parents (Ben Chaplin and Eileen Walsh) are Jehovah’s Witnesses and their faith forbids this action. Fiona takes a vested interest in the case; maybe to stop her having to deal with her own heartbreaking issues, however, it still leads her down the path of an unhealthy obsession.

There is a calming air in which the story is told, despite its glaring female character flaw, one that ranks high on the watch-ability scores. Whether totally mesmerised by Thompson’s effortless portrayal of this woman who has an abundance of compassion that she somehow manages to keep under lock and key. Or be it the familiar storyline we see in the news with hospitals going to court against families in life or death cases. It speaks with a graceful passion of parallels and subdued wanting.

Director Richard Eyre’s film is very much a film of two halves with the first half setting a fundamental picture of elegance and nuanced complexity. However, it’s second act wanes in this momentum, it almost feels like there is a big chunk of an essential storyline missing to complete a fulfilling centrepiece. As ever, Emma Thompson is the epitome of powerhouse acting and brings this house to order.

The Children Act is in UK cinemas August 24