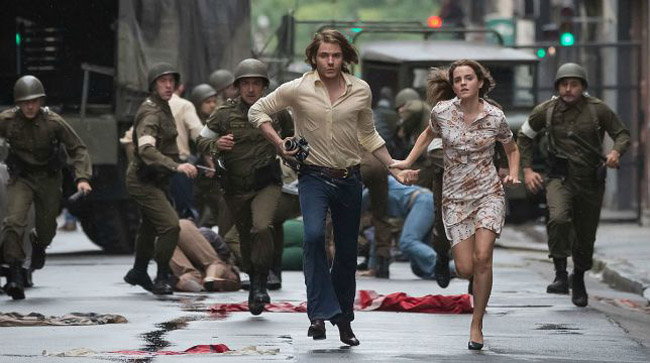 1973 saw Chile in the midst of a Chilean Coup; under the leadership of the fascist regime of General Pinochet, the Chilean People were ready to take a stand. The Colony, which is based on true events, sets itself smack bang in the middle of this uprising with horrendous outcomes but does it try just a little too hard?

The Colony delves into the story of Paul Schafer, played here by a frighteningly evil Michael Nyqvist (The Girl with the Dragon Tattoo and John Wick) and his German sect, Colonia Dignidad. Not a very well known story, but one in which the terrorisation, brainwashing and complete brutality of vulnerable men, women, and especially children seem to have gone angrily under the radar. Director Florian Gallenberger has bravely given some light on the whole horrifying affair and which unearths even the German Embassy in Chile turning a blind eye to the atrocities that occurred in Colonia Dignidad. The foundation of The Colony is a love story between Daniel (Daniel Bruhl – best known for his roles in Rush and Captain America: Civil War) and Lena, played by Harry Potter’s own Emma Watson – in a role which could very shock her devoted fan base. Lena is a sparky flight attendant in love with a German Activist, Daniel. Whilst on leave the couple take time together to have fun but the pair find themselves running the streets as the coup sets in, seeing the pair arrested and Daniel whisked away for interrogation at a secret camp which so happens to be located beneath Colonia Dignidad, a camp heavily supported by General Pinochet.

To the outside world Colonia Dignidad is a charitable mission, but on the inside terror reigns and no one ever escapes. Lena desperate to save Daniel finds a way into the cult by the skin of her teeth when Schafer makes her open her blouse to reveal a lacy bra. Lena goes undercover to seek out a battered Daniel who now appears to have some form of brain damage. Once the two are reunited they hatch a daring plan to escape, one in which they have to run for their lives not only from the chilling Schafer but Pinochet’s government henchmen and the German embassy.

It’s not until the pair find each other in the camp that the story begins to come to life, injecting some intrigue and thrilling suspense. It misses any actual visible brutality and a deeper insight into the actions of Schafer within the camp, and only hinting at the atrocious crimes this man carried out. It’s a slow burner but once The Colony jumps into life its human rights storyline manages to take a hit as it turns into a cat and mouse chase.

The Colony is in cinemas and on Demand from July 1st.