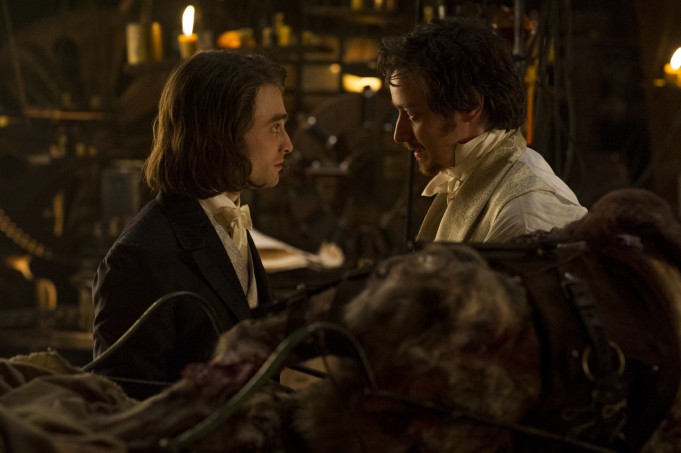 With the release of Victor Frankenstein, the fresh new take on Mary Shelley’s classic story out in cinemas on 3rd of December it was only right we took a look at the versatile careers of its leading men, Daniel Radcliffe, and James McAvoy.

This twist on the legendary tale see’s James McAvoy plays Victor Frankenstein alongside his protégé Igor Strausman played by the equally compelling Daniel Radcliffe. The share a common interest, aiding humanity through their own research, but Victor takes his experiments just a little too far which turns into a horrifying nightmare. It’s down to Igor to save the man from his own monstrous creation.

Scottish-born, McAvoy’s career first began back in 1995 but after small parts in the film Wimbledon and Comedy series Early Doors he truly landed on his feet with a stint in the acclaimed TV series of Shameless. He has since gone on to star in some truly great films, but we’ve cut it down to his most notable.

The Last King of Scotland McAvoy puts in a thrilling performance in The Last King of Scotland. He plays Scottish Doctor Nicholas Garrigan, a young Physician who is taken on by Idi Amin (Forest Whitaker) as his personal doctor and soon becomes his closest confidant. At first he is truly flattered and relishes in his new found power but soon realizes Amin’s rule is a violent and bloody one as he becomes complicit in his murderous ways.  He faces the fight of his life as he tries to escape from the man he thought he knew. Adapted from the novel of the same name from David Nicholls this comedy-drama has become a bit of a classic amongst the 30 something generation. Set in 1985 McAvoy plays Brian Jackson, a working-class boy from Essex in his first year at university. Starring alongside Benedict Cumberbatch, Brian tries hard to impress not only his fellow Uni students but the girl he falls in love with. Nothing ever runs this smooth and when he obtains a place on the team for the TV Series of University Challenge he finds cheating can only lead to his downfall.

James McAvoy certainly came to age in this heartbreaking period drama of lost love. Starring alongside the very wooden acting of Keira Knightley (don’t let this put you off it’s still a decent film). Gone is the shaggy dog style haircut and replaced with a more grown up and handsome look. McAvoy plays Robbie Turner, a young man torn away from his love Cecilia Tallis (Knightley) after her jealous younger sister Briony (Saoirse Ronan) orchestrates a lie about Robbie that tears them apart. All three end up paying a price and especially Robbie who ends up in jail, with a life so very nearly in tatters the lovers paths cross once again during World War II… But is this real or all just in the head of Briony? If McAvoy’s name hadn’t already been cemented in cinematic history before it certainly is now with the arrival of the superhero film X-Men: First Class. This origins story of the characters of this much-loved franchise see’s McAvoy playing a younger version of Charles Xavier alongside Michael Fassbender as Magneto and their friendship and fall out during the 60’s at the height of the Cold War. With the third film of this spin-off franchise, X-Men: Apocalypse, due for release in 2016 we think he did a pretty good job of nailing his part to the wall.

It’s pretty safe to say we have watched Daniel Radcliffe grow up in front of own eyes over the years in his starring role as Harry Potter. As a child actor playing the same role for many years could be difficult for them to move on once that franchise has gone. Radcliffe, however, has proved different and with a want of not being typecast he certainly has started to prove he is pretty versatile in a number of different roles.

The iconic role that made Radcliffe a global star from the tender age of 12 took up most of his teenage years when this franchise ran for 10 years. Radcliffe brought to life the witchery and wizardly world of JK Rowling’s wonderful books of child fantasy. We simply couldn’t imagine anyone else playing this role and it certainly catapulted this boy into super stardom as it became a cult hit.

The Woman in Black Radcliffe’s first big screen breakout film came in the form of The book and stage adaption of The Woman in Black where he plays grieving lawyer, Arthur Kipps. It was hard shaking off that boy image of Potter with this film, but Radcliffe certainly took it all in his stride as he became a man in this creepy dark tale of a killer ghost. This brilliant biographical drama surrounding the political literary giant Allen Ginsberg, played by Radcliffe, tells the story of his and fellow Beat Generation members early college years where sexual experiences, coming of age and being accused of murder are all on the agenda. Radcliffe certainly shone in this film putting him firmly on the map as a diverse actor. This dark fantasy comedy horror was certainly a strange one, but Radcliffe’s original performance certainly stands out from a bit of a questionable script. Radcliffe plays Ig, a 26-year-old man who is accused of raping and murdering his girlfriend. When he awakens from a drunken night out, He finds two horns growing from his head that give him the power to compel people into revealing their deepest secrets and goes on a mission to prove his innocence.

Victor Frankenstein is out in cinemas 3rd December.