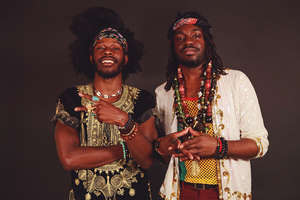 For some of you the name Jesse Boykins III will spark the synapses into furious action because he is at the forefront of those anti-establishment artists that seek to create music that they want to make rather than music they feel will appease a fat cat label owner. Boykins III bludgeoned the music world back in 2008 with his hugely inspiring debut EP Dopamine: My Life On My Back-it was soulful almost Dwele like but not as we know it! Since then through his brilliant productive skills, he has made the underground (and more and more the over ground) buzz with anticipation for more music.

MeLo-X in contrast is an underground champ who is a ‘creative’ in every sense of the word being a photographer, poet, film maker and most importantly a beat maker extraordinaire whose bold approach to beat making is reminiscent in some respects to the great Dilla. Remixes of tracks by Maxwell is the tip of a CV of beat production that pushes the boundaries of music.

2013 sees the two creatives collide like two atoms racing at near the speed of light (Haldron Collider style) to bring their debut collaborative album a vortex called Guru Zulu. It’s an intense and sublime musical experience that takes you to the dark side of the moon! From the intricately designed cover which is reminiscent of something from that mercurial enigma of yester year, Sun Ra, to the aural niceness of the album it’s a classy piece of work.

The first single off the album, Black Orpheus is a rambunctious hypnotic African beat fuelled sound that at first startles you but as the song progresses, the mood changes as Boykins III serenades with his soulful lyrics and MeLo-X drops sixteens talking of love. Black Orpheus as the first single has set out their stall, stating “you ain’t never heard an album like this before” this track grows on you every time you press play).

It’s an album that is an ethereal journey into hip-hop courtesy of the intricate verboseness of MeLo-X and the vocal delicacies of Boykins III- it’s soul, spoken word, conscious lyrics, romantic yearnings, social commentary, and more, compressed into forty minutes or so of MeLo-X and Boykins III productive skills slapping you repeatedly across the cheek-and you will gladly turn the other cheek for further slaps.

Over in the UK to promote the album, the dynamic duo gave Flavour an insight into the album, bringing something fresh and their love of UK artists.

Loving the album it really pushes some boundaries-explain the title for the album and the inspirations.

Jesse Boykins III: I came up with this concept when I was really young like when I was twenty-two. I came with this statement: ‘I am an original Zulu Guru from Jamaica ya know?’ – I just said that shit. I was taking Buddhism classes when I was in college and I was learning about African studies as well and that obviously helped to fuel those thoughts.

So how did that statement become the album?

MeLo-X: Me and Jesse were already making music together but we were also immersed in culture and educating ourselves and re-educating ourselves on things especially things to do with spiritually in music and how music makes us feel and how it feels for us to make the music. Since we had been working and learning together it was no hesitation to make the album-we Zulu Gurus-Zulu because we from Africa but Gurus because we are always very spiritual our music always has morals and we are always trying to educate our people.

The album has amongst other things an Afrocentric feel? Jesse: They actually want to call our music RnB or hip-hop because we are black. We do not make black music we make music for the world. It’s easier to understand this as an album of love songs-not love songs in the sense of men and women but love songs in the sense of ‘I care, I am passionate’. When I listened to the album that is what it made me feel. It is brave music because most artists put out what is en vogue right now but we put out what makes us feel right.

Jesse Boykins III: We have the narrative and then we ask-‘how can we express this’? However that comes out is how it comes up whether it be up-tempo, if it is slow, House that is what it is because that is what we need to convey that story.

The album is quite unique and seems to resist an individual genre classification.

Jesse Boykins III: Genres makes it easier for the labels to put you somewhere but I think we have a lot of different music that hits a lot of different fields that is why we call what we do “world soul”. Our musical capacity is way beyond genres we listen to music like it is a religion-I don’t care what genre it is I care what it makes me feel!

MeLo-X:Music is never going to be just one thing that is what the cover is about, the Ying and the Yang so there is always going to be a commercial route and something else that people are going to gravitate to get away from that. I feel that what we do is something right in the middle it can reach that market but it gives you something more, something of substance-there’s longevity in the music we make.


Jesse Boykins III: Schwaza is a made up word from our experiences in Berlin. We actually put it on the urban internet. Schwaza is something that you cannot even use words to express a particular feeling so for example you might be like “just finished the song ‘schwaza” meaning it is good. So that is what we always say we just trying to lead this ‘schwaza life’

MeLo-X: That is what we living now the connection we have with the world through the music. In the song I say ‘schwaza life schwaza light/let me tell the people what the squad is like/we bonded like family to these random beats’.

Jesse Boykins III: We actually went to Africa together as our ‘romantic movement’ and all the travelling that we did we got to bond with all these different people and we bonded together that is living this schwaza life.

Where did you go in Africa?


Jesse Boykins III: We went to New Guinea and then we went to Jozi [Johannesburg] we were there for like six days and that was probably one of my best trips like all this year it was crazy it was great to feel like that. The stuff we were listening to out there was so eclectic though it was like hip-hop, House-we were there and like we never heard this sound before it was amazing.

The album has some great skits on there.


Jesse Boykins III: Some of the skits are taken from films but I also have my friends on there they are poets and they are part of our romantic movement. I asked them to do some pieces and that is what they did. When the album comes out actually there will be filmed footage of them that I shot. I have always been a really big fan of spoken word and poetry and that was instilled in me growing up in the nineties and being New York and around intellectuals that expressed themselves.

At one point Mel, you shout out the UK-who are you feeling in terms of artists?


MeLo-X: I am always shouting UK because I feel like I get a lot of love from here. I am feeling Wiley, MJ Cole, Kano of course, Lady Leshurr I like her stuff. I would love to work with Lianna Havas and of course Liam Bailey as well-there are some great artists here so hopefully that will happen soon.

Lastly what are you up to individually?


Jesse Boykins III: Love Apparatus that is my next album and that should be done by the end of this year to come out next year. I am working on a documentary that will accompany the album about women for women. It has been like a year and a half to complete it so it has been a long time.

MeLo-x: I have been working on my first official album forever so after this project I am going to take the time to actually put together my first project so that should be early next year.