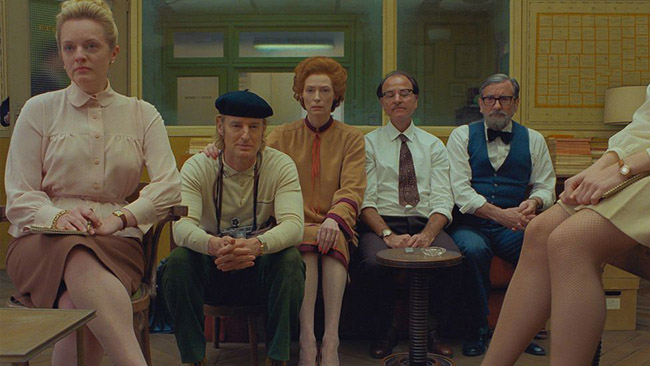 Isle of Dogs filmmaker Wes Anderson returns with another over stylised quirky offering with an A-list cast for his latest. An ode to print magazines, The French Dispatch is full of vibrant and clever compositions but it doesn’t make up for the fact the comedy and coherency of his story are woefully lacking.

What some may call visionary, others will just see the much COVID delayed film is very much the same as what Anderson has come up with before. In this collection of stories from the final issue of an American magazine published in a fictional 20th-century French city, we have something that is obviously aimed at the middle-class pseudo-intellectual for whom art is an interpretation of intellect.

On the unexpected death of the magazine’s editor Arthur Howitzer, Jr (Bill Murray), the magazine’s staff gathers around his dead body – laid out on his desk in his office – to write his obituary. What comes next is a broken-down version of four different short stories from the mouths of his journalists stiffly laid out from The Cycling Reporter (Owen Wilson); The Concrete Masterpiece, Told through the mouth of Tilda Swinton’s art critic about a criminally insane painter (Benicio del Toro), his guard and dominatrix muse (Léa Seydoux), and his money-hungry dealers (Adrien Brody); Revisions to a Manifesto, a chronicle of love and death on the barricades at the height of student revolt headed up by a wild-haired Timothee Chalamet and a blunt & sexually active Frances McDormand and The Private Dining Room of the Police Commissioner, a suspenseful tale of drugs, kidnapping and fine dining told from the mind of the intellectual food critic played by Jeffrey Wright very much in the form of James Baldwin.

The major issue here is not only is this magazine tribute overstuffed but just like the bourgeois traits of its characters, every angle of every story is filled with pretention of the highest order. With Isle of Dogs, Anderson brought humour and originality with light-hearted verve and an emotional connection. Here he simply fails to build any sort of connection painfully leaving the viewer checking their watch on a number of occasions. The only saving grace comes in the last story, splitting between live-action and animation, although grim, bringing a certain playfulness to an otherwise self-indulgent piece of art.