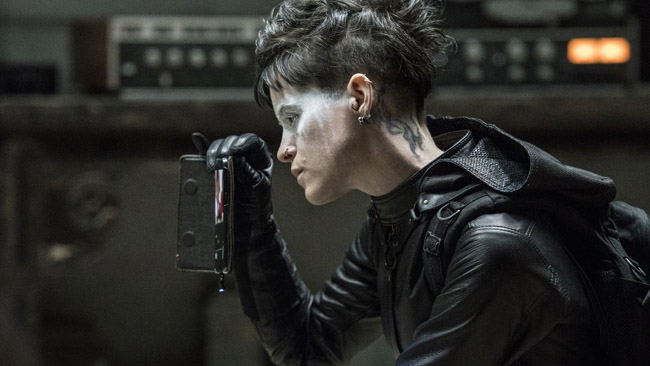 Claire Foy has swapped her Crown as Netflix’s Queen Elizabeth II to become one of the many faces of Stieg Larsson’s Lisbeth Salander. She’s a rampaging femme fatale whose latest mission becomes a whole lot more personal when she is forced to face her bleak and painful childhood in this stripped back, revenge fest.

After seven years without Salander, the ass-kicking savour for women, the savour that punishes men who abuse women. Fede Álvarez tackles this complex woman and her dark, traumatised edges with a high-octane yet simplified plot, a plot that places Foy in pole-position to shed her prim and proper royal image to scream ‘hey world, please don’t pigeon hole me for the rest of my career’ and quite frankly, Foy is the best thing about this bland and chillingly cold and almost forgettable adaptation.

The film opens with Salander fighting the good fight as she gives an abusive man a real good kicking around his frosty stylised modern apartment saving his partner from anymore bloody suffering.  Fast forward a fair bit and Salander finds herself in the thick of it. Becoming Sweden’s number one enemy after she finds herself in possession of a piece of technology that control’s nuclear weapons, Salander has been misjudged, mislead and set up. As she fights her way through the snowy, rural semi-noir settings of the Swedish landscape, her past comes back to haunt her in the form of her long lost, estranged sister opening up a whole new bag of worms.

As Alvarez delves into Salander’s past, it emphasises the events that shaped her future and where the issues begun with her sister. Whereas some may question the need to unravel her dark and torturous childhood, it takes away the constant niggling of what truly motivated this mysterious woman to become a one-woman advocate for punishing cowardly toxic men who assume beating, raping and abusing women as OK.

Staying marginally faithful to the series, journalist Mikael Blomkvist (Sverrir Gudnason) does show his face to help her investigation into the criminal gang that wants to get their hands on the lethal technology she is trying so hard to protect. His part is small and quite rightly so, he may want to come and rescue her but for once, in this male-centric hero Hollywood universe, she proves she can well handle herself as she escapes her exploding, warehouse converted home by diving into a bath of water.

Keeping with the theme of the previous movies, the action sequences are explosive and intense, made even more visually impressive by the vast landscape of the Swedish mountainous countryside. Apart from Foy’s expressive performance, layered with a controlled emotional vulnerability, its plot is extremely one dimensional and predictable. You really don’t need to have read the books to figure out, very early on, where this one is leading you.

The Girl in the Spiders Web is in cinemas November 21.