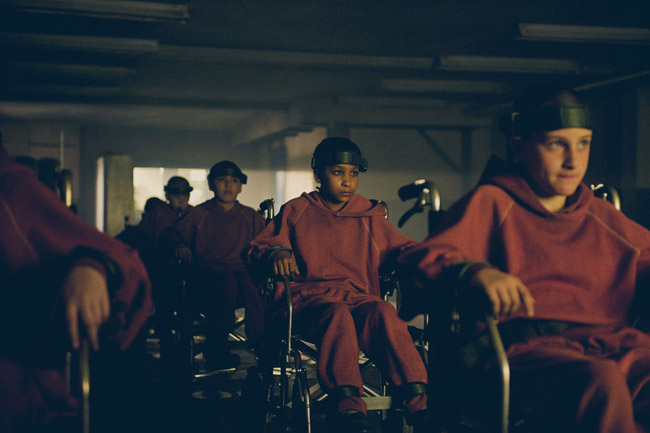 The aptest setting for a zombie film is a post-apocalyptic world – The Girl with all the Gifts, which is based on the novel by M.R. Carey – A familiar yet dystopian future which seems too close to the present world we live in today.

The common formula for any given zombie is one who has no brains as they stumble in their snail-like movements longing for their next feast. These level one creatures are still ever present in this simple narrative, however, director Colm McCarthy, alongside Carey as screenwriter, have developed a more human touch in the next generation of zombie in The Girl with all The Gifts. Our child zombies have evolved into a smarter, intelligent hybrid species who have the ability to think for themselves with emotions all whilst still craving human flesh. Whilst the outside world has been infected with a fungal disease a group of young children are held prisoner at a research facility headed up by a frosty no-nonsense Dr. Caldwell (played by Glenn Close). Each day the children are set free from their cells but remain strapped into wheelchairs as they are taken to class to be given lessons of all kinds by the soft-hearted Helen (Gemma Arterton). The reason why these children are seen as such a threat is for the simple reason that once in the presence of a human who hasn’t applied blocker gel they go crazy for the smell of their next meal. Before too long a mass of ‘hungries’ – a term given to the zombies – storm the facility and all hell breaks loose as it becomes every man and women for themselves and we are soon left with just a small group – including the child Melanie (Sennia Nanua), who Helen has built a strong bond with. As the looming tension is built, the group – which consist of a doting Helen, a questioning Melanie, Dr. Caldwell and a rather gauche Paddy Considine as Sergeant Parks – set out in a tank to find a safe place to hide out, somewhere where their survival will be kept safe from harm.

A fascinating progression comes from the young Melanie as she starts to understand what she is, she develops her own individuality and interestingly enough becomes the group’s leader and saviour amongst the inevitable fate that awaits them.

With many zombie films, it’s just a question of how long and who is going to meet their maker first, this goes down exactly the same route. Characters are put into situations which are all too obvious and what starts out as a creative and intelligent jump for the genre just becomes predictable, falling into every single trap you expect to rear its flesh-eating head. It so frantically craves a meatier plot; one which we can sink our teeth into, something that gives it gumption as it limps it way into its finale like a severed leg into is evolution.

The Girl With All The Gifts is out in cinemas September 23.