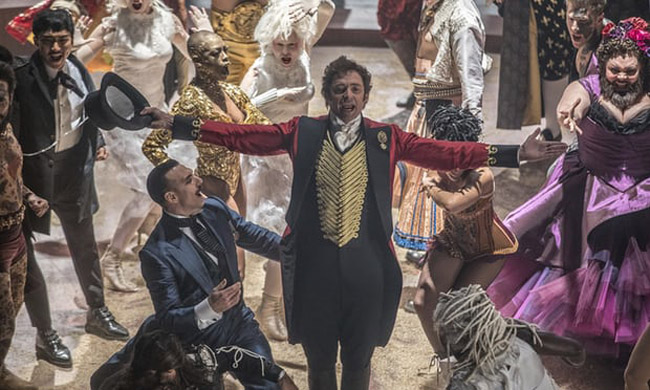 Musicals are not to the taste of many, but in The Greatest Showman, we get a grand old Christmas, feel-good fare of cheesy entertainment. A showcase, as such, for the singing and dancing talents of one Hugh Jackman doused with a number of catchy and foot tapping numbers designed to put a grin on your face. It’s these attributes that drown out any form of a strong dramatical storyline which walks on a thin tightrope.

Think Moulin Rouge coated with a montage of candy laced songs ranging from poppy, chart-topping belters to heartbreaking ballads. The Greatest Showman is loosely based on the rise of circus founder and entrepreneur, PT Barnum, played by the towering figure of Jackman. A from rags to riches tale of perseverance for success, and all the highbrow success that comes with it, but also the downfalls.

Quickly moving through his less than easy childhood, the story focuses the Barnum as an adult, a dreamer but most importantly a man that loves his family and would develop anything for them. Barnum is a chancer and wings it to open his entertainment emporium, PT Barnum’s circus. Recruiting the mysterious, extraordinary and social outcasts, from bearded ladies to Wolfman’s, whether fake or real, to put on a magical show for those curious enough to come through his doors. But Barnum wants bigger and better and he goes to any lengths to fulfil his dream no matter the cost, turning his back on those that made him the success he became.

Jackman is charm personified here and can do no wrong with his vocal stylings; the man even has a few decent dance moves up his sleeve. He has a certain innocent in his childlike dreams, even when he becomes seduced by the dazzling lights and glitz of mixing with high society. Michelle Williams plays Charity, Barnum’s childhood love and wife who gives up her family wealth to marry the man she loves and sticks by him through the bad and the good.

We also have Zac Efron, thankfully, puts his previous questionable roles behind him and takes on the role of Philip Carlyle, a playwright who, through a partnership with Barnum, opens up doors to a high-class audience. He takes a backseat to Jackman’s but gets his own lacklustre romantic tangle when he falls for the African American Zendaya causing a stir amongst his bigoted family.

Too many subplots scratch the surface that could have so easily been developed with a little more effort. One of the aforementioned relationship between Efron and Zendaya and that of Barnum’s hinted infidelity with the Swedish Songstress, Jenny Lind, played by Rebecca Ferguson. It smacks of lazy script writing, with the onus firmly placed on “family” entertainment all the focus us purely laid at the feet of its musical arrangements.

The Greatest Showman is a festive musical treat with an enchanting performance from Jackman and a feel-good soundtrack you’ll be hunting down as soon as you leave the cinema, but if you are after a storyline with a bit of substance you’ll be waiting a long time.

The Greatest Showman is out in cinemas December 26th.