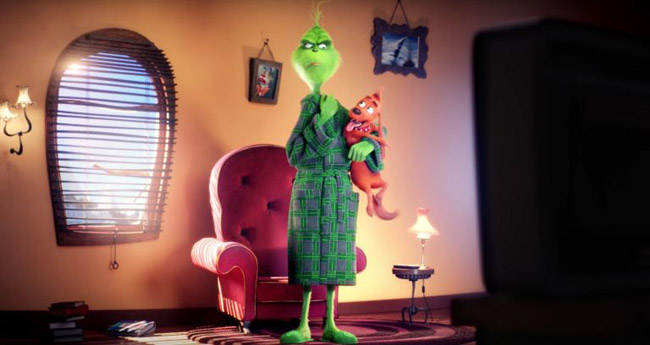 It’s an age-old story that just keeps coming back to the silver screen. From the makers behind Despicable Me and The Minions, Illumination brings to life the green misery guts for a third screen outing. The first came in 1966 as a TV special but in 2000 Jim Carrey stole Christmas as the lonely miser. This year’s Christmas treat takes the voice of Benedict Cumberbatch, but that green furball and his loyal dog Max feels almost watered down and he has lost the edgy grumpiness that Carrey bought to the character.

Narrated by Pharrell Williams and based on the Dr Seuss book, How the Grinch Stole Christmas, we are introduced to Cumberbatch’s Grinch in his vast cave home in the hills of Whosville. Woken by his Dog Max – who doubles up as not just his loyal companion but his Butler too – with his morning coffee. In order to avoid the Christmas loving town, Grinch had stocked up a stash of food that was supposed to last him to New Year, as he hunts through the cupboards he realises he has comfort eaten his way through the lot meaning only one thing, a trip into town amongst the Christmas buzz.

In the meantime, we are introduced to the overzealous little girl Cindy Lou (Cameron Seely), and her overworked single parent Mother, Donna (Rashida Jones). Cindy is full of crazy idea’s and adventure and is hell-bent on getting her one unselfish wish to Santa one way or another. As the town goes into Christmas overdrive, The Christmas hating Grinch watches from his perch as the town is transformed, with memories of being outcast as a child for being different whirling through his head, he once and for all vows to steal Christmas.

Directors Yarrow Cheney and Scott Mosier have created a vibrant feast for the eyes, a candy fuelled maze of extravagant detail and warmth that embraces the joy of the festive season and strips away its commercialism. It’s hearty to hear a child wish for something that will benefit someone else rather than themselves and ultimately melt the heart of the meanest of creatures.

It’s also a story of acceptance and forgiveness, and let’s face it, we don’t see so much of that in the current climate we all live in. Whosville is filled to the brim with festive cheer, not even the fact they’ve all been robbed of every Christmas gift and decoration dampens their spirits. Bringing forward a lesson to not hang on to the past to the point it freezes you out of a changing society.

A feast of festive fun will appeal to both kids and adults alike. Lots of Christmas joy with a reminder that love and kindness is not just for Christmas.

The Grinch is out in cinema’s November 9th.