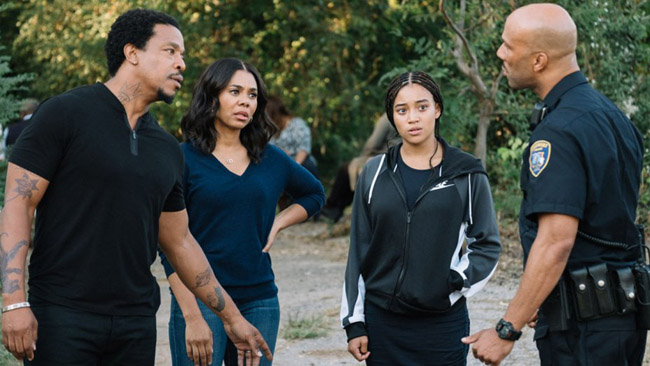 It’s a subject all too common in our world headlines, young black men and women being slain down by maverick cops with a trigger happy finger. Filmmaker and Notorious director, George Tillman Jr. adapts Angie Thomas’s 2017 bestselling YA novel, The Hate U Give, with a knockout gut punch that resonates with poignant tenacity, a sobering reality and a blistering performance from Amandla Stenberg.

Stenberg takes on the role of the conflicted Starr. Living in a predominately black community; drug dealers are scattered on each corner with the youth thinking they have no other choice to make money than to join the criminal life. To provide her children with a fighting chance in life, Starr’s Mother played by Regina Hall and her noble Black Panther Father, played by Russell Hornsby, send them to a white school in a more desirable part of town. By day Starr, whose white school friends engage in black culture, has to hide her ‘black’ side. By night, amongst her home community, she treads on ice to hide her white mannerisms. She even has to hide the fact she has a white boyfriend from her own Father.

Whilst attending a party in which she reunites with her handsome childhood friend Khalil (Algee Smith) gunshots are fired. The charming Khalil, who obviously, however, bears a torch for his old Harry Potter companion, offers to drive her home. As the pair reminisces, who was Harry and who was Hermione in their old childhood games, they are pulled over by a cop culminating in a horrifically heartbreaking conclusion. As the sole witness to the senseless murder, Starr faces an agonising decision that weighs heavy on her soldiers. To testify before a Grand Jury, she faces having to not only reveal she witnessed the cruel murder of her friend to her school friends, but she also faces the threat of violence to her and her family from the local drug king (Anthony Mackie).

While the shooting and murder of a young innocent black man leave a prominent mark on the audience, what is also quite sickening is the blatant abuse of the #blacklivesmatter phrase by the white students at Starr’s school. They are shown treating a march for the cause as just an excuse to skip class, which quite rightly, gets under Starr’s skin. She also finds out, that while her best friend talks the talk and ‘doesn’t see race’ she is inherently racist, making Starr question her loyalty and most importantly her identity.

With the subject matter of the movie being one of significant importance; to balance out the tremendously intense nature where Tupac’s Thug life spells out the acronym of the movie, and more so centring on his lyric ‘The Hate U Give Little Infants Fucks Everyone’, there are a number of light-hearted moments. Starr’s Father compares Hogwarts to representing gang culture. It is, after all, a culture he knows merely too well after having invested years in the gangs before going it straight and opening a community store. Starr’s boyfriend also gets his moment with her Father. Before the big reveal, Starr and her brother give the unsuspecting lad a black culture pop quiz. One that involves whether Mac N’ Cheese is the main course or a side dish.

Tillman Jr and the cast have expressed nothing but passion and a fierce formidable force. Transforming the YA novel into a powerhouse movie that speaks with an affecting, rousing call to an end to the insanity of bigotry and the cycle of hate.

The Hate U Give is out in cinemas October 22.