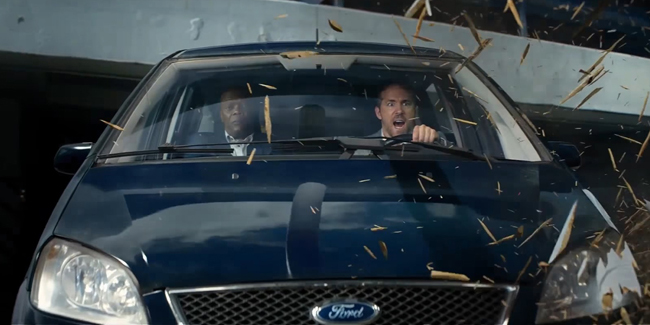 Doused in Muthf***ers, The Hitman’s Bodyguard is a no-brainer, no literally, Patrick Hughes venture into the world of high octane, tongue in cheek entertainment is an all-out romp of fun in which you can switch off for a couple of hours and just sit back and enjoy it for what it is.

This venture wouldn’t be as hilariously funny without its two main leads, Samuel L. Jackson and Ryan Reynolds, who take a pretty formulaic script and make it their own filled with expletives and an odd chemistry as a Hitman and a Bodyguard with personalities that clash like chalk and cheese, with one hired to protect the other the one upmanship is rife as well as the unbelievable stunts that would leave many dead… Hey, this is the movies after all.

Michael Bryce (Ryan Reynolds) is a grade A Bodyguard, never seen out of a slick suit, he’s suave, debonair and downright grumpy, but he is one of the best out there. Darius Kincaid (Samuel L. Jackson), is the slickest hitman in the market, one who never seems to die no matter how times he takes a bullet. However, when Kincaid’s life is put in danger as he is due to testify against an Eastern European dictator (Gary Oldman), Bryce is hired to protect Kincaid, an assassin who has tried to end the life of Kincaid 28 times, as they cross Europe to get Kincaid, in one piece, to the International Court of Justice before times runs out on the trail. As the duo cross Europe via Coventry, we are met with relentless brutality and mechanical car chases through city’s, the violence is high but the ensuing scenes of hilarity, which includes Kincaid, nonplussed that his life is in danger, and Bryce hitching a ride with a bunch of nuns in which Kincaid proceeds to have a sing-song with to Bryce’s annoyance. Selma Hayek, who plays Kincaid’s wife, has her part to play too, the pair are often seen smitten with each other in various flashbacks but this is one babe you wouldn’t want to mess with as she is seen beating a room full of men to a pulp to Lionel Richie’s Hello.

It’s a buddy road trip movie with added spice to give it some flavour but there are times when certain actor’s talents are completed wasted with their over elaborate characters coming straight from the pages of a child’s fantasy comic.

Very much a platform for Jackson and Reynolds to show their comedic muscle, if it wasn’t for these men and their excellence in delivering comedy gold The Hitman’s Bodyguard could have turned out far worse. It really does lack in substance and deep thought but come on, everyone needs that escape from depths of reality and indulge in some brainless entertainment once in a while.

The Hitman’s Bodyguard is in cinemas August 17th