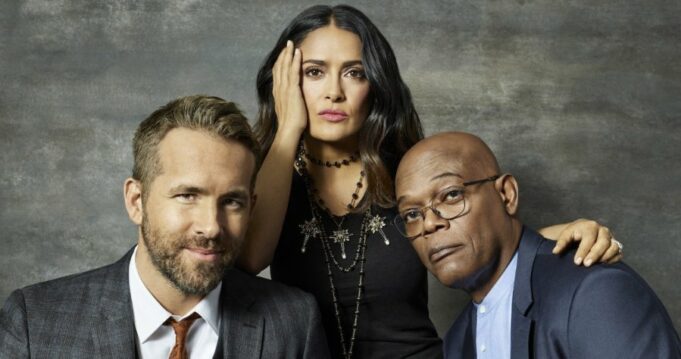 Selma Hayek, Ryan Reynolds and Samuel L. Jackson return for more ludicrous, outlandish and foul-mouthed japery in the sequel to the 2017 action-comedy The Hitman’s Bodyguard.

Big on popcorn fodder but lacking in as many laughs as its predecessor, this explosive generic picture at least gives us an hour and ’40 minutes to switch off from the world and lose ourselves in some big-screen entertainment.

Reynolds returns as Bodyguard Michael Bryce, traumatised from his last encounter with Jackson’s hitman, Darius Kincaid. He has lost his AAA bodyguarding license and has been ordered to take a sabbatical by his therapist.  That sabbatical doesn’t last long when Hayek’s Sonia Kincaid, the wife of Darius interrupts his tranquillity with a shootout with the mafia seeking his help to rescue Darius who has been kidnapped. Kicking and screaming, Bryce has literally no other option than to fulfil her request.

The winner in this picture has to be Hayek, full of badass female ferocity and a mouth that needs washing out more than Jackson’s, she gives the action and over the top comedy, 110% as she yarns for the honeymoon Darius promised her and a child her womb aches for. On the other hand, both Bryce and Darius not only have to save the world but have to face up to their past. Bryce has to face the disappointment of his double-crossing stepfather and the AAA bodyguard he longs to be played by Tom Hopper. Darius, thanks to a previous encounter with Bryce has his own secret that could jeopardise his future as a Father.

There is a lot going on here and to cram it all into such a small space seems virtually impossible, but they do it. Maybe not in style but they do and a handful of it is rather pleasing including the special cameo appearance of one Morgan Freeman. They may have scraped by on the jokes but you can’t fault them for the action set pieces that include blowing a bridge and motorcycle chases amongst the streets of Italy.

It’s big and brash and it’s bawdy, but what else would you expect from an action-comedy? It may not win any awards but it’s one of those bad films you just can’t help but have some fun with.