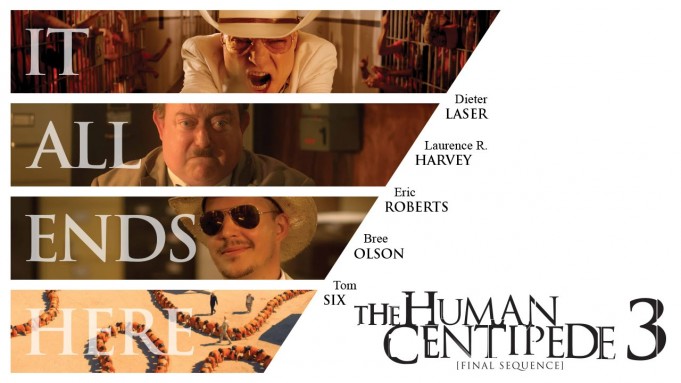 The Human Centipede has become one of those cult films that are so awful, vile and in completely bad taste you can’t help but watch it. So when the announcement came that they were making a third instalment you wonder what direction are they going in now!

Prison warden Bill Boss (Dieter Laser), an egotistical bully, yarns for respect. Not just from the state Governor (Eric Roberts) and his loyal right-hand man Dwight (Laurence R Harvey) but from the prison inmates too. The only way to earn the respect of the Governor and to keep his job is to turn around the abysmal statistics the prison has for the amount of riots, medical costs and staff turnover. Quickly going insane from the heat and the constant failed attempts at punishment, it’s Dwight that gives him the brilliant revolutionary idea for the ideal punishment which could also save the prison systems billions of dollars…. The Human Centipede.

The Human Centipede 3 may be the last in this sick franchise but it reunites the stars of the first two films (Dieter Laser & Laurence R. Harvey) as the two leads, not only this but the first two films, a bit like the second in the franchise, are a major influence to the characters and the outcome of the storyline. Director, Tom Six (who also makes his own little cameo appearance as himself) certainly has taken hold of the phrase; if it ain’t broke don’t fix it. It’s safe to say if you’ve seen the first two films you’ll know exactly what to expect.

Even though the film is set in one location, there seems to have been a bigger budget behind this film as it looks and feels like it has had a spit and polish visually and attracting the likes of Eric Roberts and ex-porn star, Bree Olsen to jump on the sick and insane bandwagon.

It has to be said this has to be a much darker episode of the trilogy, one instance would be a punishment that would make any men squirm in his seat as Bill personally and graphically removes an inmate’s testicles and orders the guards to take them away to be cooked for his dinner. Another scene that sticks in the mind, because it’s that’s disturbing, is a scene of a sexual nature where the warden is dreaming he is being sexually abused but from within a man-made hole, Oh did I forget to mention there may also be eating of dried clitoris too.

Whilst the acting isn’t the greatest on earth, from any of the cast, this just adds to why this franchise has become such a cult classic. Everything is just mentally over the top.

The Human Centipede 3 is quite easily the best in the trilogy, its sick; it’s vile and totally insane but with many laugh out loud moments it’ll certainly please it’s fans and who knows we could just see a spin off with… The Human Caterpillar.