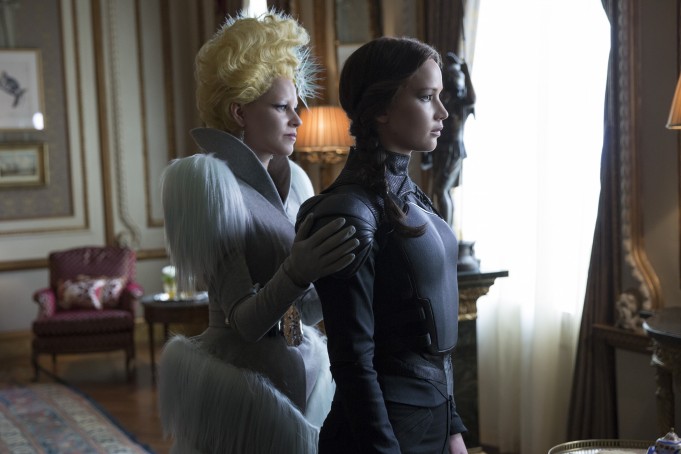 The fourth and final installment of The Hunger Games, Mockingjay part 2 is a welcome ending to the franchise. The Hunger Games Mockingjay part 2 is a story which, ties up the fight for peace and fairness in the dystopian world of Panem, and leaves us wondering why the studios feel the need to split a story which could have so easily been told in one movie.

We start of the film in exactly the same place as where part 1 finished, Katniss (Jennifer Lawrence) is broken and Peeta (Josh Hutcherson) has to be tied down due to him being extremely mentally unstable with the slightest glimpse of Katniss sending him over the edge.  President Coin (Julianne Moore) can’t risk having Katniss taking over the control or limelight in the fight against President Snow (Donald Sutherland) and the capital so she is given orders to take a back seat on the fighting front and sent to join a group put together for propaganda purposes only.

This first half of the film, where we witness Katniss, Finnick, Peeta, Gale and the rest of the squad tiptoe through the Capital trying to avoid the traps put in place to kill the members of the resistance   is extremely slow but full of tension. Unfortunately it never quite hits the spot of the first two films in the franchise. The story just comes across as stretched and dragged out to make sure the filmmakers had enough material to make up its two hours and 17 minutes running time. What’s missing? Explosive action and the back-handed actions of Snow and his men to give its audience a thrill and a reason to fully immerse yourself into this story. It’s not all a total disappointment, though; the film finally picks up the pace when one of its beloved characters is horrifically mauled to death and Katniss comes ever closer to the home of President Snow giving us more of what its audience first fell in love with. Of course all games come to an end and after its ‘revealed’ Snow bombed his own people including Children (this is when we lose another one of our most cherished Characters), Snow is captured at and is made ready for execution. It soon unfolds it wasn’t actually Snow’s orders to unleash the bombs but one inside the resistance camp and one that angers Katniss to the core.

Jennifer Lawrence captivates throughout the whole film, this young actress really needs to be given more credit in her acting ability, She can portray so many different emotions and although it can be dialogue heavy (which doesn’t really work for this type of film) she takes it all in her stride and makes every last little bit convincing except that is from the mess of an ending you are made to endure. It’s obvious we need to tie up this story with a happy ending, but it feels very much like an afterthought and just thrown in without any care or consideration. I would recommend you watch this film and if you haven’t read the books, go and have a read then come back to it from the beginning and make up your minds. The Hunger Games – MockingJay part 2 is full of tension, fairly simply, dialogue heavy and in parts just a bit messy. It’s not quite a fitting end to this great tribute.

The Hunger Games Mockingjay Part 2 is out in UK Cinemas 19th November.