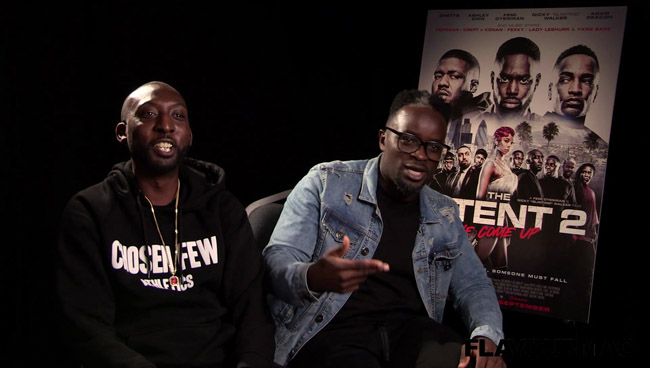 The Intent created a buzz when it was released in 2016. Femi Oyeniran and Nicky Slimting Walker took the crime-ridden streets of London and made it speak to an audience that are rarely represented in film. Now the guys are back with prequel with a few familiar faces and some new ones too.

With the first-ever collaboration with a record company, Island Records, the filmmakers not only deliver bigger budget infused film but also the introduction of the acting skills of Grime artist, Ghetts who takes the lead. Joining Ghetts faces from the music scene also include, Krept and Konan, Popcaan and Fekky.

THE INTENT 2: THE COME UP centres on Jay (Ghetts) who has big dreams, but his ambitions are crippled by his allegiance to both his crew and Hackney crime boss Beverley (Sharon Duncan-Brewster). Jay sets about laying the foundations for his own organised crime ring with the help of Mustafa (Adam Deacon). Things are going well until Beverley discovers his disloyalty, and an ill-fated robbery in North London followed by a critical trip to Jamaica that tears the crew apart. All the while, their actions are being monitored by an undercover Met Police officer Gunz (Dylan Duffus), who has been deployed to integrate himself into the crew.

With its expansive and global storyline spanning from London to Jamaica, THE INTENT II: The Come Up promises to deepen the connections that fans of the original loved whilst appealing to new fans.

Flavourmag’s Zehra Phelan caught up with writer/directors and stars of the film Femi Oyeniran and Nicky Slimting Walker to chat about the film and moving the filming from the streets of London to Jamaica. Watch the full interview below.

Not seen the trailer yet? Watch the explosive trailer below to get a taste of what’s to come.

The Intent 2: The Come Up hits cinemas September 21