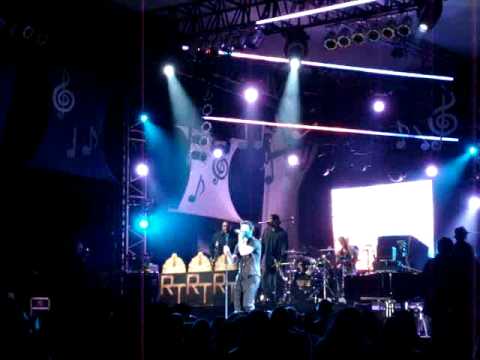 The Jamaican Jazz & Blues festival, which was held along the elegant corridor in Rose Hall, was a flurry of activity on the 22-24 January with revellers from across the world descending the languid sunshine island of Jamaica.Three nights of musical pleasure combined the eclectic, contemporary and the popular which saw a premier list of artists come together for what is considered one of the biggest outdoor jazz and blues festivals in the Caribbean.

The opening night began with a stellar line up including jazz quartet Reunion Jazz Band, Cuban pop act Los Van Van, alternative reggae act Matisyahu, Estelle, Robin Thicke and 80’s old skool favourites Ashford & Simpson, whose hour long set closed out the night. Stand out performances included a polished performance from award winning multi platinum R&B crooner Robin Thicke who donned the stage like the modish gentleman he is, paying tribute to 70’s soul and pop music singing brand new songs off his 1970’s inspired album Something Else. Ending his set with the popular track Lost Without You, cemented his position as one of the greatest classic soul singers of our generation. The UK’s very own Estelle proved to be just as agreeable and looked fabulous in a silver sequined dress. Popular songs, Just A Touch, More Than Friends were received well and her rendition of Get Ready by The Temptations was also another great crowd pleaser, however it wasn’t until she sung her number one single American Boy to close out the night that the crowd really started to show their appreciation, especially when she serenaded her Jamaican fans and ended the song with “You’ll be my Jamaican boy.”

Day two saw an eclectic mix of performers descend the colossal stage. Alto Reed’s Blues Entourage, Randy Crawford & Joe Sample, Lou Gramm and Tony Hendriks all performed however it was on this night that we were introduced to 14-year-old jazz singer Nikki Yanofsky. The Canadian born teenager held her own against some of the more seasoned performers of the night and wowed the audience with her rendition of several Bob Marley classics. Her strong voice transcended across the field, which bellied her tender age and meager form. It was somewhat unexpected from this relatively unknown and some might say she stole the show. To close, headline act Lionel Ritchie stayed true to form and delivered a satisfying set of classics old and new.

The festival drew to an end on Saturday with energetic performances by E-Park Band, Carlene Carter, Atlantic Starr and Chicago. The O’jays gave an extraordinary performance alongside Maxi Priest who closed the festival out to a very contented audience.