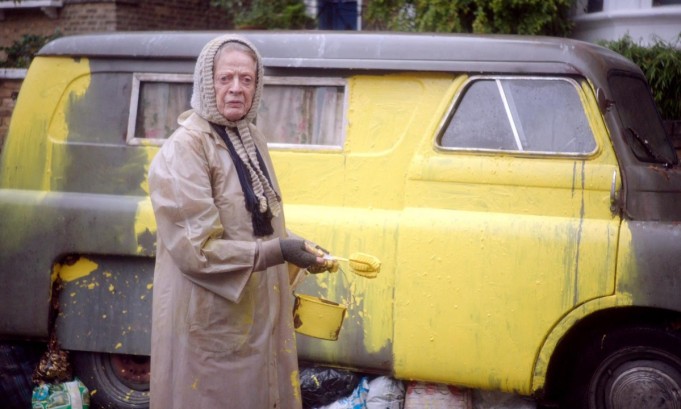 You don’t get much more English than this film adaptation of Alan Bennett’s true story, Lady in The Van. With the likes of the legendary Maggie Smith taking the joyous lead, you can’t help but fall in love with this miserable and cantankerous old biddy.

Ms Shepherd (Maggie Smith) is a homeless old lady, living in a Bedford van on a street in the posh side of Camden Town. She moves the van and settles it outside each house until she finds some kind of irritation. Eventually, after striking up a bit of a friendship with Bennett (Alex Jennings), decides his drive would be the perfect place to settle. Bennett with his big heart and weakness for old ladies agrees but only on a temporary basis. She proceeds to live on his driveway for the next 15 years of her life.

No one knows anything about the ungrateful Ms Shepherd, the neighbours take pity and bring her food and gifts, but she by no means knows the meaning of a simple thank you.  Bit by bit her past life unravels throughout the film as Bennett, who appears as his human self and as the writer, undertakes a little detective work to find out how she managed to end up the way she has. Jennings double character brings some hugely laughable moments as he quite frequently argues and chit-chats with his writer self, coming across like you would expect a married couple to be like.

Even though at times Bennett becomes so frustrated with Ms Shepherd and her bigoted, rude and love for leaving piles of excrement on his driveway, pushing him to the edge, his fondness for her grows deep and on a number of occasions comes to her rescue when being hassled by a dodgy ex-policemen for backhanders and a couple of louts. At the same time, Bennett also struggles with his own mother’s withering health issues.

It’s hard to believe that the only time we ever see Ms Shepherd smile is when she paints her vans, she has an attachment to the colour yellow, a colour that radiates the sun and has that feeling of happiness, a complete contrast to her character. Maggie Smith is a complete joy to watch, anyone familiar with her work will know how fantastic she is at playing the rude characters and this suits her down to the ground. Smith actually played the role if Ms Shepherd some 16 years ago, so it was obviously no stranger to her, this probably aided in playing the role so well you actually believe she is the character.

The film is also laced with a host of names and faces you will be familiar with, such as James Cordon as a market trader who against his better judgement calls her love and gets a mouthful in return to Dominic Cooper and the good old Jim Broadbent.

Lady in the Van is just a perfect little film full of humour and touching moments that will have you reaching for the tissues (thankfully towards the end). Most of all The Lady in the Van is Quintessentially English.

The Lady in the Van is out in Cinemas 13th November.