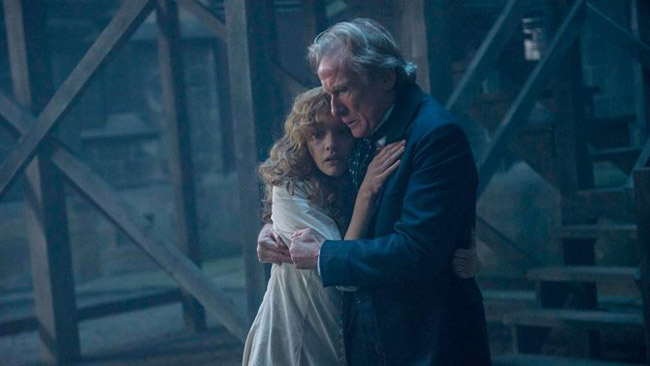 Forever portrayed as a shadowy and squalid place, yet again, late 1880’s London plays home to the murderous glow of mysterious and brutal killings in Juan Carlos Medina’s The Limehouse Golem. Delving into the murkiest setting of murders, on street and stage lays the tale of a Jack the Ripper-esque killing spree leading down a labyrinth of revenge.

Based on the novel by Peter Ackroyd, the difference here to any Ripper story that has come before is that women, or one woman, in particular, takes centre stage. An act of feminism gives this story a refreshing twist against the many despicable events that unfold with that lurid Victorian hue and Sherlock like detective skills where everyone is a suspect from the rich aristocrat to those of real historical figures.

The story centres around Elizabeth or little Lizzie (Olivia Cooke) as she is known by her friends, a slight of a girl who has dragged herself out of absolute poverty as a child to be the leading attraction at the local Music Hall after a sudden death of one of the music hall troupe places in her a position to become a Salty Sailor. However, after the death of her husband, scholar and playwright, John (Sam Reid), she becomes the main suspect in his untimely demise.

Detective Kildare (Bill Nighy) is put in charge of the case, along with his sidekick slow on the uptake constable George Flood (Daniel Mays) so he can take the fall when results don’t go their way, Utterly embroiled in the case be begins to decipher clues from hand written scrawls found in a book at the British Library, he begins to bond with Lizzie as she recounts her past depicted in flashbacks that lead to the position they are now in. From her early childhood and the mistreatment from her mother to how she became to be employed by ‘Uncle’ (Eddie Marsan) to becoming the best of friends with fellow actor/drag artist and star of the troupe Dan Leno (Douglas Booth) – revelations are unearthed that put her very own husband top of the tree as the main suspect and even those historical figures such as Karl Marx and George Gissing are firmly placed in the frame with imaginations running wild.

Those that die so gruesomely at the golem’s hands all in some way deserve their fate.  In a typical whodunit plot, twists and turns come from every angle only to die with a whimpering breath, acts of flamboyant extravagance behold in a story which opens as though the audience is witnessing a play, it has elements of the exaggerated just like you would find from any theatre performance but this all adds to its compelling charm along with the outlandishly camp performance from Douglas Booth.

Enriched with a warming glow of autumnal tones, set within a roaring open fire, on one hand, the greyish dark sinister tone levels out any feeling of complete content. As the final curtain begins to fall, of course, the real killer is revealed which will come as no surprise to anyone; it’s a glaring inevitability from its opening act but it dampens nothing of the drama of richly, at times, ludicrous entertainment.

The Limehouse Golem is in cinemas September 1st.