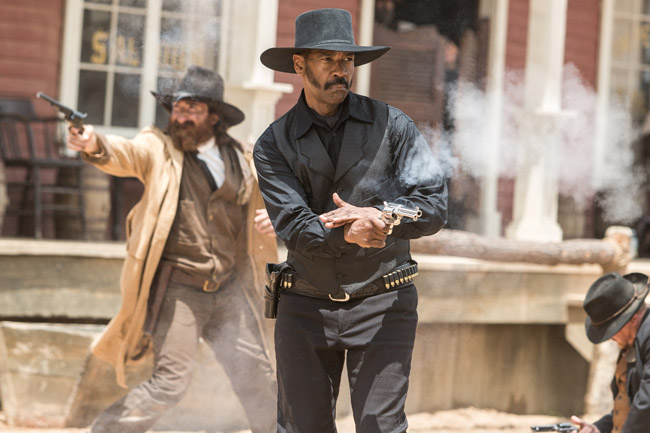 If you’re not a fan of the Western, Antoine Fuqua’s remake of the classic The Magnificent Seven – which is lead by the standard righteous performance of Denzel Washington – has just enough fun and frivolity to keep you rooting for the rogue yet good guys till the end.

Fuqua – who has worked alongside Washington before in Training Day and The Equalizer – provides not only an astonishing ensemble cast but a stunning array of well-choreographed shootouts fused together with slick precision in The Magnificent Seven, but the lack of heart and soul makes for a piece where we don’t really care about the impending fate of this bunch of miss-matched outlaws no matter how good their performance.  With yet another remake coming out of a year which has proven time and again that Hollywood seems to have lost its creativity for originality – failing to deliver on what made these classics in the first place – surely it sends a strong message that it’s time to hang up the spurs and put the ghost of nostalgia to bed!?

Bogue (Peter Sarsgaard) storms into the sleepy village of Rose Creek filled with greed and a lack of respect to the townsfolk and surrounding by burly henchmen, at whatever cost he will take over the town. Meeting a lackluster opposition from the locals he sets the church on fire and has a handful of people killed. Enter Sam Chisholm (Washington) looking every inch the typical cowboy dressed from head to toe in black. He has been hired to kill the shabby barman of the town, impressing and frightening the inhabitants with his quick fire actions.  He is subsequently hired by a grieving wife to put together a band of men to protect the town from Bogue’s impending brutal takeover.

Chisholm puts together an odd yet diverse group of men which consist of the gambling, alcoholic Josh Faraday played with the certain endearing charm of Chris Pratt – which we all loved in Guardians of the Galaxy. Ethan Hawke joins the gang as Goodnight Robicheaux – an ex-confederate soldier who seems to be suffering from a case of post-traumatic stress and a complete lack of personality – who brings along his Asian sidekick, Billy Rocks (Byung-hun Lee) who has a lightening touch with knives. Joining the men so far comes Vincent D’Onofrio as Jack Horne – A tracker who despite his shape is wily in movement, just a little simply and completely loveable. The final two men – who make little impact in the plot – come in the form of Manuel Garcia-Rulfo as the Texan outlaw Vasquez and Martin Sensmeier as Red Harvest – A Commanche Indian whose painted face seems to miraculously appear and disappear before your very eyes. The most commanding of this motley crew alongside Washington has to be the presence of Pratt.

The finale is straight forward – no fuss or thrills, twists or turns are present – Fuqua has kept this simply. After the gathering of the men and the typical bonding session takes place the band of merry men ride back into Rose Creek sending a loud message to Bogue to come and try them out for size. Bogue – in his retaliation – gathers an army to take on the group with a spectacular shower of bullets in a shootout to end all shootouts. The problem is of course that some of our seven saviours don’t make it out alive – while against this army and Gatling gun you wouldn’t expect anything less – but apart from one, you couldn’t really care less.

The Magnificent Seven is out in cinemas September 23.