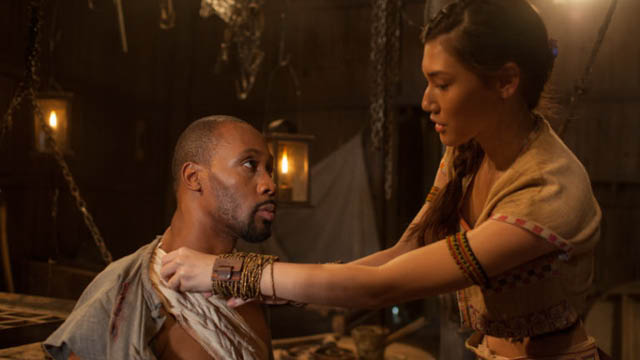 We’ve done it again and bagged ourselves another exclusive. This time we have an exclusive clip from The Man With The Iron Fist 2 as well as the official UK trailer for the film.

After watching the first instalment of The Man with the Iron Fists it should come as no surprise to learn that in 2015 the sequel, The Man With The Iron Fists 2 (if you did not know the name) where Robert Fitzgerald aka Bobby digital or aka Rza (as he is better known) returns as The Blacksmith.

The Wu Tang producer a maestro of their biggest hits is evidently revelling in fulfilling a dream bringing a 19th century martial art film based in China back. The Man With The Iron Fists 2, evidently harks back to his love of those old school martial art films that he sampled on classic albums like Enter the Wu Tang: 36 Chambers (1993). Directing, writing and taking the lead role once again; bones are broken, jaws are fractured and those iron first are placed in regions technically too small even for the pinky finger on those well armoured iron fists.

The Synopsis
Well it’s not really important but if you must know it takes a distinctly similar trajectory to its predecessor. Our anti-establishment hero shows a joy for inflicting pain while helping a local miner called Li Kung to find his confidence again and use his martial arts skills. They in-turn rid his small village of the megalomaniac Master Ho by whipping each and every sycophant that follows this man with a penchant for monologues before ultimately beating every single monologue out of Master Ho’s soul. Grace Huang also starred in the first instalment and you may have seen Grace before in movies such as Badges of Fury, Lost For Words and Love In Space, is this the making of an all new Michelle Yeoh? Grace looks badass with guns and every badder with swords and knives, so we are looking forward to seeing her on our screens. Its a film with no pretences and as long as you take it for that-it’s glorified violence at its Hollywood best.

Man Wit The Iron Fists 2 on Blu-ray and DVD from May 18th.  Also available – the Man With The Iron Fists 1&2 DVD Double Pack. Pre-Order it here: http://bit.ly/MWTIFAMAZON