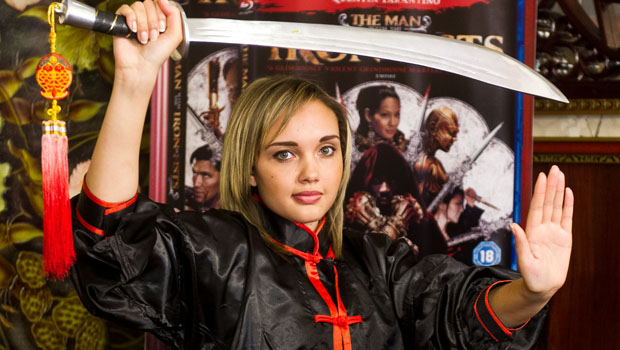 In eager anticipation for The Man With The Iron Fists DVD release next week, I attended a Kung Fu master class with four martial arts experts including a double black belt instructor, at the Phoenix Palace Restaurant.

The Phoenix Palace is a decadent and authentic Chinese restaurant, which looks similar to the brothel featured in the film, making the whole experience even more like a scene from the American martial arts movie. The Man With The Iron Fists which was directed by Wu-Tang Clan’s RZA, has an impressive cast including, Russel Crowe and Lucy Liu and is a modern martial arts film which draws inspiration from the old style films.

When RZA was asked what inspired him to make a martial arts film, he said, “Martial Art films have been influencing me probably since the tender age of nine when I saw my first Kung Fu movies or karate flicks. When I actually joined Wu-Tang Clan in 1993, it was the martial art films and genre that gave me this brilliant idea of how to express myself.” On the day I donned a traditional martial arts outfit and got stuck into learning some moves from the martial arts experts! I learn’t a selection of moves including: the horse stance punch, inner block, reverse punch, front snapping kick, turning kick, spinning back slice kick, jumping front kick, tiger claw, reverse sweep and the chi power push.

My inner martial arts warrior came out in full force and it was exciting to see the four martial arts experts in action, with their graceful moves compared to my clumsy attempts! The Chinese food afterwards was the icing on the cake and although I won’t be getting my black belt any time soon, I have learn’t how to protect myself if someone tries to get in my personal space. Hi-yah!

Check out our on set footage from the movie here: https://www.youtube.com/watch?v=Bh1Ikcb_-jg