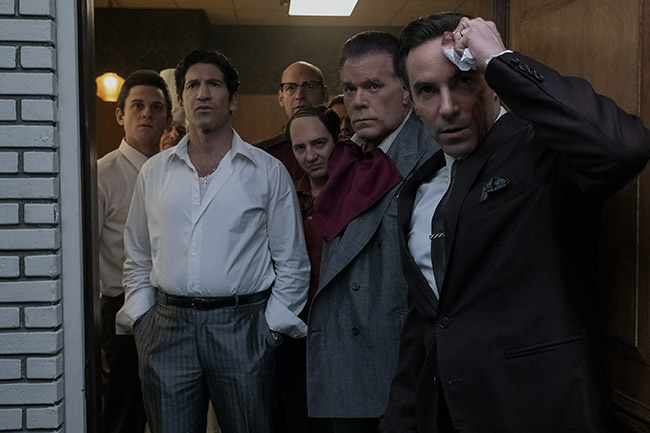 After 14 years since the final episode aired of the iconic mobster series The Sopranos aired, series creator David Chase delves back into the world of dodgy dealings, murder and family betrayal once again with the prequel feature.

It’s a prequel that not only veers into pointless territories but treats its audience with contempt by feeling the need to spell out every little detail.

Whereas the series followed Tony Soprano played by the late James Gandolfini, the feature is supposed to take us back to how it all began with a young Tony growing up amongst the mob on the streets of Newark. Narrated by the series character Christopher Moltisanti, Tony’s nephew who met with an untimely death at the end of the series, the film seems to be a little confused as to who its main character really is. Billed as Tony’s back story, this one really belongs to his beloved uncle Dickie Moltisanti (Alessandro Nivola) and how his relationship with the young Tony – played by Gandolfini’s real-life son, Michael – made him the mob boss we all came to love.

Uncle Dickie – who at this point was having trouble conceiving –  is more of a Father figure to Tony than his actual father, stepping up to take the role while Tony’s father was locked up in prison. However, Dickie is at the end of the day a Mafioso, but a Mafioso with blood on his hands, a guilty conscious and a target on his head from more than one so-called enemy.

The biggest issue with this is that, due to the series, fans of the show are only too familiar with the story that is presented to us. Each younger version of the shows characters such as Paulie Gualtieri (Billy Magnussen), Junior Soprano (Corey Stoll) and Silvio Dante (John Magaro) each get their own mini back story represented via impersonations and costumes that bring to mind a childish element akin to 1973’s Bugsy Malone. Tony’s parents played by Vera Farmiga as his Mother Nancy and Jon Bernthal as his Father Johnny Boy was an odd choice of casting, seemingly the writers had also forgotten the relationship dynamic between the two from what we had been led to believe with Johnny Boy doting on Nancy.

Then we have the tangents, the misfires and pointless parts of the story that seem to be cushioned as impractical fillers.  Leslie Odom Jnr. Pops up as a soldier working for Dickie on the streets, collecting money from the lowlife drug dealers who think they can rip off the Mafia. No longer happy with his lot, he branches out on his own and vows to take down his main rival – then we have Ray Liotta as a Moltisanti… but that would be heading into a less than thrilling spoiler territory.

Director Alan Taylor has kept that same pacing and aesthetic and humour that has become synonymous with the series, but we are left languishing with an imposter storyline. You can’t help wonder whether this should have been left to sleep with the fishes.