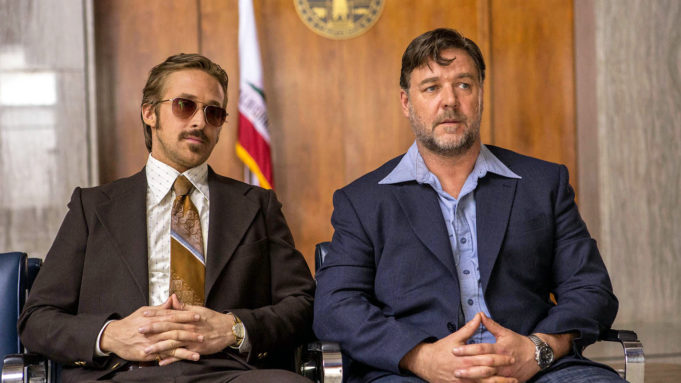 When writer and Director Shane Black teamed up with producer Joel Silver 30 years ago for Lethal Weapon it was the start of a beautiful friendship, one that has blossomed and matured into their new venture – The Nice Guys – for an explosive 70’s bromance comedy with disastrous moments that will truly make you laugh out loud.

The Nice Guys sees an unlikely duo pair up in award winners Ryan Gosling who plays March Holland, the luckiest unlucky private detective to ever walk the earth, and Russell Crowe who plays Jackson Healy, a big old beefy man who hires himself out to beat up on people showing his client’s unwanted attention. What makes this pairing such a wonderful thing to watch is the chemistry Gosling and Crowe have on screen? They bounce off each other with hilarious rapport like they have been working as a team for years. Its’ 1977 in Los Angeles, Pornstar Misty Mountain meets her horrific death when her car careers off the road and into the home a child fan! Enter March Holland, a PI who hires himself out to the old and forgetful to solve the cases of missing loved ones. Misty’s aunt hires March to find her niece after she is convinced she saw her after the funeral. Healy is hired by another female, Amelia, to warn off Holland from following her which leads to a beautiful partnership but not before Healy breaks March’s arm. Both of their jobs are interconnected in corruption and controversy, but these bad guys have a conscious they can’t ignore and vow to solve the mystery of this case.

What follows is one disastrous moment after another for March as he not only ends up cutting his arm losing a copious amount of blood while trying to break into a property but also sees him fall off balconies and have as many mishaps as humanly possible. Goslings comedic action and timing is completely unexpected, he makes every single scene seem effortless.

Another subplot to this story is the dysfunctional relationship March has with his daughter Holly, – the 13 year old Angourie Rice. It’s evidently clear there is a complete role reversal with this pair, Holly completely commands her father and keeps him in check and is the most mature character within the film. Rice is certainly one to watch in the future.

With any detective story, we need a villain and Matt Bomer, although lacking in a large amount of dialogue does an incredible job as Johnboy. Kim Basinger also teams up with her L.A. Confidential actor Crowe as Amelia’s corrupt mother. Black brings his type of action like only he could with explosive one on one shooting, people flying through glass windows while not actually getting injured and fires off some fantastic one-liners. He gets the balance of action and dialogue weighted perfectly; there is nothing about this film that will send you off into a slumber. One party scene sees’s March try to play the womaniser and ends up in the pool swimming after the mermaid dressed women. Healy ‘You were in the pool? Why? March ‘I had to question the mermaids….’

The Nice Guys is out in UK Cinemas June 3rd.