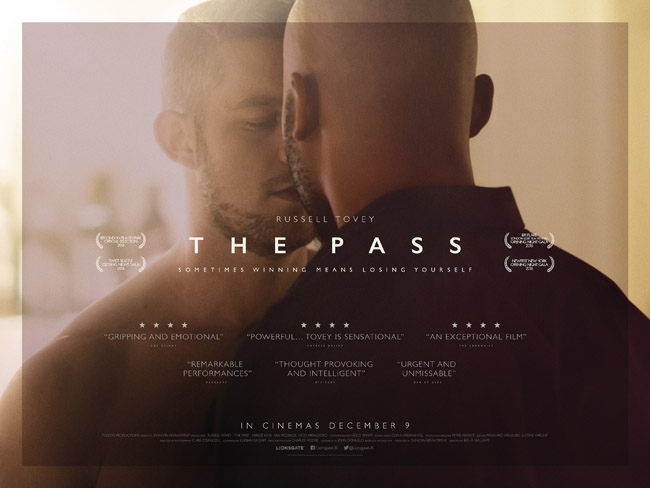 It’s only been three years since playwright, John Donnelly’s The Pass opened on the stage to rave reviews, so it was only a matter of time that this socially topical play made it onto the big screen bringing with it 99% of its original stage cast.

Russell Tovey takes up his role again as Jason, a closeted premier league footballer who struggles with his own sexual identity in a world rife with prejudices, where homophobia is an acceptable mind state amongst a sport which emanates caveman mentality from its very pores not just on the training fields but mostly from the terraces of the world’s most beautiful game.

The Pass is broken down into just three very simple scenes set over ten years, each location consisting of just a hotel room and at most, three characters. We open in a hotel room in Bucharest, Jason (Tovey) and Ade (Arinzé Kene, who happens to be the only actor not part of the original play) are two young men who have grown up together in the Football Academy of a big premier league club – one which remains nameless – Excitable about the upcoming game that will either make or break the next stage in their professional football career, and full of ladish immaturity. The pair banter and goad each other over who is the better footballer –all whilst only wearing their underwear until an intimate moment rounds off the end of act 1.

Director Ben A. Williams has delicately kept this story beautifully simple and extremely true to its stage origins, nothing is placed in the way to detract away from the issue at hand, with major emphasis laid heavy on dialogue and character development and portrayal. Over the ten year period, we experience Jason mentally deteriorating as his fame engulfs his life forcing his sexuality further and further into the back of a closet. From the introduction of a stripper (Lisa McGrillis) to a later incident involving a young male hotel worker (Nico Mirallegro) aid’s in Jason’s self-hatred festering and feeding off his internal frustration to keep up the pretence of ‘”I’m A Footballer, I can’t be gay” until it erupts into a painful conclusion.

An exceptional cast performance sees Tovey’s impressively explosive and capricious Jason nominated for The Evening Standard Best Actor award and Arinzé Kene’s patiently innocent acceptability and hushed passion nominated for Best Supporting Actor. The Pass is an intriguingly absorbing tale of the struggles of coming to terms with one’s own sexuality in the beautiful game where prejudices are rife and it’s only a matter of time before we see a high profile name blow the issue completely out of the water. Quietly and emotionally powerful, The Pass’s minimalistic scenes are extremely volatile and hit harder than a badly timed tackle.