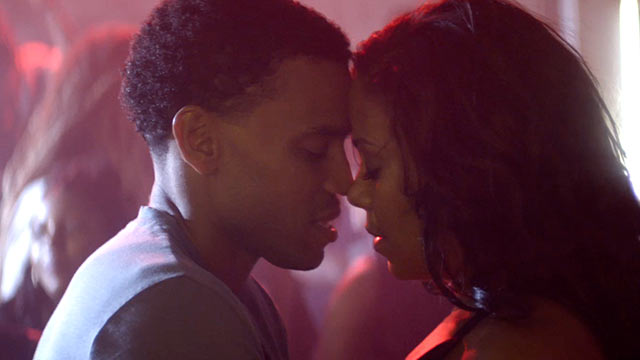 In this modern day of technology, Stalking is becoming ever more present in today’s society and with The Perfect Guy Michael Ealy proves just how scary it can get for any woman out there (even if it does work both ways).

Leah Vaughn played by the beautiful Sanaa Lathan is a successful and independent woman, but ultimately she wants a family of her own. Boyfriend Dave (Morris Chestnut) has other ideas and as she approaches the subject again with him it causes an end to their relationship. Enter the enticing Carter played by Michael Ealy, who befriends her in a coffee shop and just so happens to be in a bar to rescue the damsel in distress when Leah is trying to fight off the unwanted attentions of some letch. They quickly become quite inseparable after a passionate date and Leah believes he could just be ‘the one’. Carter quickly wins round her friends and Leah then decides to take him home to meet the parents, something she very rarely does and something she didn’t do in the whole 2 years with Dave. Carter’s charm works it magic on her parents and especially when he produces tickets for a game for her father. On the way back from their visit to her parents is when the whole relationship takes a turn for the worse when Carter violently attacks a man who he thinks is coming on to his woman in a petrol station. This is the point the film loses itself. Whilst the starting off of the relationship with Carter moves very quickly and it’s over before we know it, what follows just is one big sequence of a dragged out film where nothing much really happens.

Yes for the next hour we see Carter stalking Leah to the point where he steals her cat and sets up surveillance cameras in her house. Leah gets a restraining order placed on Carter, but this doesn’t stop him from coming within 50 yards of her. We see lots of scenes of him sitting in his car watching her house, sat at a computer watching the cameras. But when Leah gets back with Dave, in pure revenge style, and in a jealous rage he films the pair having sex, hacks her work email to send out this sex tape to all her work colleagues and clients. He even goes as far as to killing two innocent people. What may seem like a lot happens this is dragged out for 90% of the film and it all just grates slowly your nerves making you wish something truly thrilling will happen. Another issue that isn’t too convincing is the fact when Leah first approaches the police, the detective in charge really couldn’t care less and brushes her off, however, the next minute we see him giving Carter a good beating after he is warned for breaking the conditions of his restraining order and becoming ‘Friends’ with Leah outside of the office to give her some advice on how to protect herself. From this point, it quickly escalates to Leah becoming the stalker to exact her gun-toting revenge.

It’s disappointing, as this story could have held so much potential with the subject being very relevant right now and the performances both from Lathan as a scared yet woman full of fight and a bi-polar psychotic Ealy, whose eyes really do his performance justice are pretty flawless. It’s just a shame the scriptwriters really did rush the story, didn’t let it develop to its full potential and basically made this feel just a bit of a mess.

The Perfect Guy is out in Cinema 20th November.