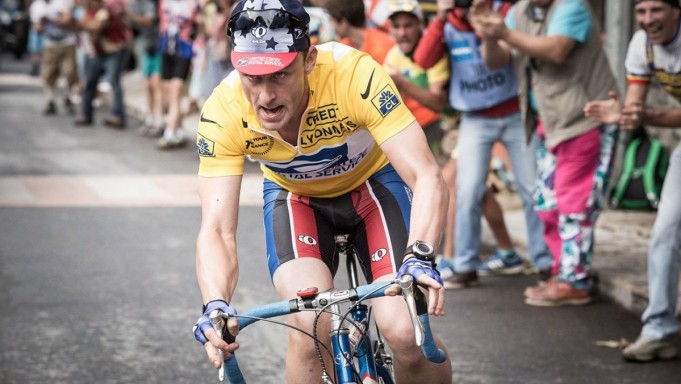 A gripping story of Lance Armstrong’s rise and fall from his arrogant grace.

Over the last few years, we have been blessed with a spate of sporting biopics that don’t just appeal to sports fans in general. The Program, being the story of cycling legend Lance Armstrong’s rise from a little unknown cyclist to a world famous Tour de France champion is so compelling anyone can enjoy.

The story starts in the 90’s, when little known Armstrong (Ben Foster) is interviewed by Sunday Times sports journalist David Walsh (Chris O’Dowd), he shows passion and a burning ambition to be the best he can be, but Walsh isn’t so convinced he has what it takes to compete in a tour. Unfortunately for Armstrong his journey is delayed as he is diagnosed with stage three testicular Cancer knocking him for six and also tugging on the sympathy of the audience.

That sympathy for Foster doesn’t last too long as he comes out the other side of his Cancer battle even more determined to be a winner and the purely contemptible arrogance starts to set in. Armstrong goes back to the notorious Italian Doctor-Coach Michele Ferrari – the man responsible for supplying the performance enhancing steroid EPO which contributed to all of Armstrong’s Tour De France victories – for his help to achieve his dream of becoming a winner.  Experiencing the effects this drug has on his amazing performance Armstrong insists on the rest of the US postal team take it too.

Meanwhile, Walsh is completely gobsmacked by Armstrong’s first victory and it sets alarm bells ringing in his head that something just isn’t right, making it his own personal life mission to seek out the truth of how a once a good cyclist who didn’t have the physique of a natural winner can take the crown of the Tour De France with so much ease.  O’Dowd, who’s dry-wit and angry facial expressions breaks up, at times the repulsiveness of Armstrong with ease and seems to relish in this role. As with the fast pace of Armstrong’s performance on the mountainous course of the competition, the film follows the same suit as we follow Armstrong growing even more repellent and full of his own self-importance. Watching this man believe he is enhancing the sport’s reputation, believing his own lies when questioned whether he uses performance-enhancing drugs when Ferrari is arrested and the sophisticated way him and his team constantly dupe and defraud the sport’s governing body in the dope testing is simply absorbing, with each scene your pulled further and further into the film with great force.

As the stories of his dope using hits an all-time high Armstrong lets out a tirade of foul-mouthed abuse about the wife of one of his teammates as she spills the beans on his disgusting deception. Ben Foster is completely mesmerizing as Armstrong; it feels as though he has bottled the very essence of the man and took it as an elixir every day during the shoot. If it wasn’t for Foster, this film wouldn’t be as gripping, intense and so entertaining for its audience as it turned out.

The Program is out in UK Cinemas on 16th October