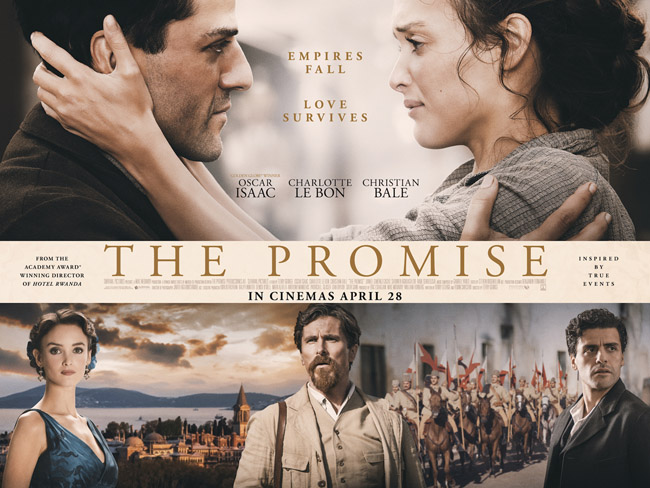 Irish screenwriter and director, Terry George is no stranger to adapting a real-life tragedy for a quietly epic cinematic experience. The Hotel Rwanda director, with The Promise, brings to life the atrocities the Armenian people faced at hands of the former Ottoman Empire only to dilute the story with a tragic and convoluted yet unconvincing love story.

Let it be noted that The Promise has promise; to touch on the events of a genocide that most know nothing about is no mean feat, but you can’t help thinking that George has certainly missed a trick here to bring this tragedy to the forefront of a society in which are witnessing similar horrendous crimes around the world at this very minute. It does more of a disservice to the Armenian people by focusing the plot on a hammy and less than feeling love story just for the sake of attracting a particular audience.

It’s 1914, and Michael (Oscar Isaac), while working at the local apothecary, has dreams of becoming a doctor but he is from a poor family in a small village where money is scarce. The only way in which Michael can obtain the money to go to school in Constantinople is to become betrothed to a woman for her dowry.  On arrival in the capital, everything goes smoothly for Michael as he begins to mix with those of wealth and power but his whole world changes from the moment he meets Ana (Charlotte Le Bon).

With a dusty grain enveloping each scene for a touch of the authentic  brutal yet exotic setting, Michael falls for Ana but she is already in a relationship with the American Journalist Chris (Christian Bale), who is in the country to cover the tensions between the Armenian’s and the Turks as the Turkish government cosy up with the German’s. Before long, tensions erupt and war begins and the three find themselves in immeasurably danger.

Intriguing it may be, but there are no hard-hitting scenes of horrifying killings to justify its 12A rating. The genocide sometimes feels like just a suggestion, forming part of the narrative as a meaty subplot to give the love story something to fall back on when the sparks fail to fly between a wooden and miss-cast Charlotte Le Bon and a fairly average Oscar Isaac. There’s a longing that arises for more perspective on the genocide, a part of the story that remains unexplored and leaves you wanting to find out more.

Although the lack of feeling towards the characters of the fate-filled love triangle and it’s woefully inadequate portrayal of the atrocities faced by the Armenian people there is still something quite endearing about The Promise, it’s warmth towards the more conventional style of storytelling is its only promise it lives up to.