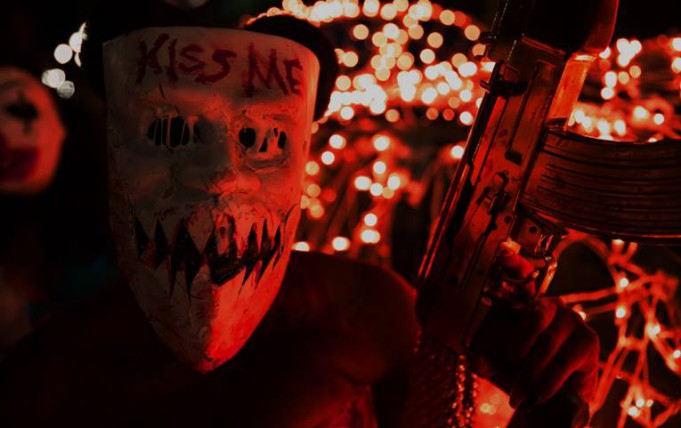 There is certainly one thing that The Purge Election Year will do and have the series of films die-hard fans whooping for delight in yet another blood-spattered offering in a genre that quite frankly needs a bomb up its backside to make them worthwhile watching again.

It’s the same old story for The Purge Election Year as it brings nothing new to its overstuffed table of obnoxious killing sprees. Many may see and attach a vague storyline that could very well be put in place with the current presidential race across the pond. With the ridiculous candidates the US has in reality, but it’s not as if this isn’t a story that wasn’t around before that farce took effect. Election year see’s Senator Charlie Roan (Elizabeth Mitchell) (who just so happens to be the girl from the family in the 1st) taking her place against the NFFA (The New Founding Fathers of America), her main aim to stop this annual purge event. It’s never going to be that easy as The NFFA wants her gone, one even states ‘It’s time to do something about that cunt senator’ As the clock strikes for the Purge to begin, with a leak in her security team the assassination attempt on Roan begins.

While the 1st in this series centred around one family and the 2nd damned the 12 hour killing spree which goes unpunished, this third almost sees it as an acceptable way of life, an excuse for petty vengeance when a couple of teens get caught stealing candy in a shop, they come back to take out the shopkeeper, It’s also seen as an easy option of getting rid of your supposed loved ones who have pissed you off when one woman shoot her husband just because she can’t stand to look at his face any longer. Interestingly, DeMonaco has added a scenario which sees’s people coming from all over the world just to take part in this bloodfest – but of course, these amateurs don’t last long.

With the return of Frank Grillo as Leo Barnes and the head of Roan’s security team, his one job is to protect her. As they go on a wild ride through the town to avoid her brutal killing they come across Joe (Mykelti Williamson) the convenience store owner and his loyal employee Marcos (Joseph Julian Soria) who team up to fight their way to safety and stop the NFFA for good.

Is it time for Writer/Director of The Purge series, James DeMonaco, to put his baby to bed and leave the lights off forever. We would hope so but as always the light at the end of this tunnel looks certain to burn for a while yet.

The Purge Election Year is out in Cinemas August  26.